By Lowes, Special for  USDR

This winter has been one of the harshest on record, and for many communities, the first day of spring will still be covered in snow. No city has been more impacted than Boston as residents have experienced one of the snowiest winters in recorded  history. 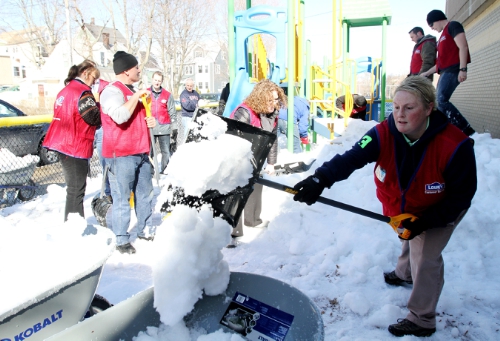 This week, Lowe’s Heroes employee volunteers kicked off the spring season by removing snow and brightening spirits at Boston’s Leahy-Holloran Community Center, where Lowe’s and Rebuilding Together installed a playground last year. Lowe’s Heroes spent Monday digging the playground out of the more than a foot of snow and ice that accumulated this winter. The team will be back in Boston to complete a spring makeover project once the ground has  thawed.

Boston wasn’t the only hard-hit city, according to the Accumulated Winter Season Severity Index (AWSSI). The following cities (listed in alphabetical order) round out the 10 U.S. cities with the harshest winters: Buffalo, New York; Detroit, Michigan; Hartford, Connecticut; Louisville, Kentucky; Nashville, Tennessee; Newark, New Jersey; New York City; Portland, Maine; and Providence, Rhode Island. The winter severity index analyzes the intensity and persistence of cold weather, the frequency and amount of snow, and the amount and persistence of snow on the ground based on historical  context.

“The data doesn’t lie – this has been one of the harshest winters in recent history and people are more than ready to shed the snow shovels and welcome spring,” said Steve Hilberg, senior climatologist/meteorologist for the Midwestern Regional Climate Center at the University of Illinois and a collaborator on the  AWSSI.

Lowe’s volunteers will visit the “10 Bleakest Cities of 2015″ to complete makeover projects that have been neglected or delayed because of extreme winter conditions. Volunteers will complete projects such as painting, landscaping, creating outdoor rooms and adding curb appeal throughout the spring  season.

Even if you don’t live in one of the hardest-hit cities, most people experienced a dull, dreary winter. According to CW Primary proprietary research, more than two-thirds of adults find projects during winter that they need to complete in their homes. In fact, 87 percent of those consumers say there are things inside of their homes that need to be fixed that bother them every time they look at  them.

Get started on your to-do list now. Visit Lowes.com/DIY for inspirational and how-to content to help transform your home this  spring.

Lowe’s Companies, Inc. (NYSE: LOW) is a FORTUNE® 100 home improvement company serving approximately 16 million customers a week in the United States, Canada and Mexico through its stores and online at lowes.com, lowes.ca and lowes.com.mx. With fiscal year 2014 sales of $56.2 billion, Lowe’s has 1,840 home improvement and hardware stores and more than 265,000 employees. Founded in 1946 and based in Mooresville, N.C., Lowe’s supports the communities it serves through programs that focus on K-12 public education and community improvement projects. For more information, visit  Lowes.com.