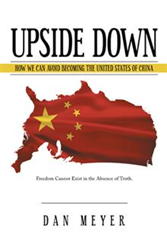 According to Pew Research Center, 59 percent of registered voters “say they feel frustrated with the federal  government.”

This sentiment among Americans is exactly what Dan Meyer aims to address in his book, “Upside Down.” According to Meyer, the federal government has drifted from the principles of the Constitution and taken away the power from the American  people.

Meyer, who was formerly involved with President Barack Obama’s campaign, believes that Obama and other previous administrations are responsible for creating a political environment that has eroded people’s trust in the government. In his book, he details why he chose to distance himself from the Obama campaign as well as why Constitutional values are not currently present in government. According to Meyer, Presidents George W. Bush, Bill Clinton and Barack Obama have lied to the American people and implemented policies that have contributed to various current problems in  government.

“President Barack Obama’s use of class, gender and race has had the intended effect of completely dividing and weakening the American people,” Meyer said. “These same problems were evident in previous administrations and nothing has  changed.”

Meyer believes that the American government can return to Constitutional limits by introducing a balanced budget and setting term limits for members of Congress. By sharing his suggestions for political reform, he wants to emphasize how the people of the United States can regain control of the nation to restore freedom and prosperity for future  generations.

“The American people must understand the truth about the government and get involved by demanding these steps that will begin to reverse the problems caused by our out of control government,” Meyer  said.