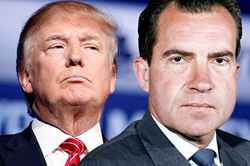 Author/historian/newsletter columnist Jenny Copeland is constantly keeping a careful watch on the news, especially as it pertains to the President. In today’s world, with the relentless barrage of Trump-related news, one thing seems to be clear for Ms. Copeland – there are stark similarities between President Trump and President  Nixon.

“My daily internet news sources, LBN (Levine Briefing Notes), Detroit Free Press. Toledo Blade and the Washington Post being my favorites, all have had articles comparing Trump to Nixon. The nightly newscasters and political pundits have held a mirror up to Trump and found Nixon staring back at them,” says  Copeland.

The main comparison that the media is making is the similarity between Nixon’s and Trump’s negotiating techniques. “Trump negotiates from a bully stance,” says Copeland, “He starts with stating his idea and the other side is worn down until they agree with him or there is no deal. He is proud of the fact that he plays King on the Hill better than most.” Nixon operated under a similar mode of harsh intimidation – “In the Nixon administration, the negotiating style was most similar to comedian Jeff Dunham’s Muslim puppet character, Achmed. If you heckle, disagree or annoy Achmed he shouts, ‘I keeel you.’”  (https://www.youtube.com/watch?v=GBvfiCdk-jc)

The key differences between these two styles of negotiation, Copeland points out, is the severity of the intimidation tactics used and ethical implications of each President’s actions. Infamously, Nixon created an “Enemies List” wherein he collected the names of those who had offended him or blocked his political agenda in any way. The actions taken by the Nixon minions against people on this list were usually illegal and often deadly. Trump, while still a bully, has never stooped this low… yet. Copeland explains that, “so far, making Trump angry has not ended in a list, as far as we know, of individuals targeted for intimidation using death threats or  murders.”

This poses a very serious question: Could the Trump administration, given enough time, descend to the murderous state reached by the Nixon  era?

A second parallel between Trump and Nixon is their obsession with their own image – in the public eye and in their administration. For Trump, he controls his staff and his supporters though the power of his indomitable celebrity status. “He is essentially the star of an American political show, and he will remain the star for the rest of his presidency”. Similarly, Nixon maintained a forceful image and reputation wherein he could control anything and everything in the White House, but dissimilar to Trump, he operated more like a mad scientist controlling his army of minions in the shadows, rather than a bombastic celebrity barking orders for the entire world to hear. “Nixon forced everyone to see him as the mastermind behind his administration, and through his tireless efforts, he became (to use Bush terms) the ‘Decider’ of all  matters.”

The final and most glaring similarity Copeland points out between both men is their inability to determine truth. Whatever seemed to push Nixon’s political and personal agendas forward would be embraced as truth even in the face of facts that disagreed with his beliefs. Eisenhower was quoted as saying he didn’t think Nixon knew how not to lie. Comparably, Trump’s tweets have shown that he is fond of splashing out statements that others would say are mistruths. Trump doesn’t seem to care. Copeland explains, “there has not been one claim of an erratum as yet made by Trump. When a retraction is overwhelmingly required, it falls to Sean Spicer to  handle.”

As developments continue during this new administration, Copeland believes that there is a chance more parallels between these two men will come to  light.