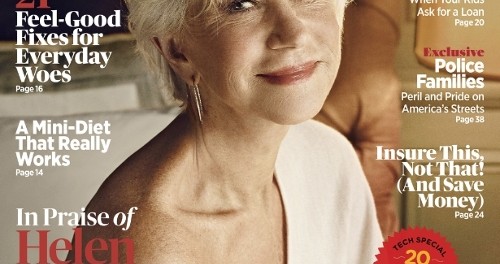 For five decades, Helen Mirren has captivated audiences in theaters and cinemas—and her stature just keeps growing. In an exclusive interview with AARP The Magazine (ATM), Mirren gives us a provocative look into the mind and life of one of Hollywood’s most versatile and daring performers. Known for unabashedly speaking her mind, Mirren shares some of the grittiest details of her life – from growing up poor in post-World War II London, to traveling across America, to why she changed her mind and got married, to the challenges of working as a film actor in her  70s.

Mirren’s success began with her onstage debut with the Royal Shakespeare Company in Trevor Nunn’s 1966 staging of The Revenger’s Tragedy. First seen as a Shakespearean stage actress, she launched and maintained a parallel film career with movies like Elizabeth I¸ RED, The Queen, A Midsummer Night’s Dream and Trumbo led her to her appointment as a Dame Commander of the Order of the British Empire (DBE)—despite an adventurous career that included roles in such films as the shocking Caligula. Mirren’s latest role is in Collateral Beauty, where she supports star Will Smith as part of an ensemble cast that also features Edward Norton, Keira Knightley, and Kate  Winslet.

The following are excerpts from the December/January issue of the AARP The Magazine cover story featuring Helen Mirren, available in homes starting November 1st and available online now at  www.aarp.org/magazine/.

Ask Her Anything:
Brexit? “Terrifying – tribalism, nationalism and self-protection.”
Cheddar cheese? “American cheddar is so ghastly.”
Viagra for women? “Yes. It’s time that was addressed.”
Photo retouching? “A little bit’s very nice, thank you very much.”
Her sexy rep? “I think it’s probably going to follow me to my grave.”
London’s East End? “It’s absolutely my sense of identity.”
Actor Edward Norton? “He’s a very smart cat. Really smart.”
Rules? “It’s good to break your own rules on a regular basis.”
Diets? “I carry and let go of the same 10 pounds.”
The word “slut”? “I love the way young women are claiming it.”
Muhammad Ali? “We’ve sanctified him, but he had a mean streak.”

On being an actress in her 70s:
“The best thing about being over 70 is being over 70.  Certainly when I was 45, the idea of being 70 was like ‘Arghhh!’ but you only have two options in life: Die young or get old.  There is nothing else.  The idea of dying young when you’re 25 is kind of cool — a bit romantic, like James Dean.  But then you realize that life is too much fun to do that.  It’s fascinating and wonderful and emotional.  So you just have to find a way of negotiating getting old psychologically and  physically.”

On her thoughts of  America:
“I’ve always loved America,” Mirren says. “I found it exciting.  I found it liberating.  I found it fascinating.  America is so varied and so beautiful!  From Louisiana to New Mexico, Georgia, the Blue Ridge Mountains, the Dakotas, oh my God! It’s  spectacular.”

Mirren first visited the States in the 1960s, when she was on tour with the Royal Shakespeare Company.  With a few days to spare between shows in San Francisco and Detroit, “a few of us took the train across the Salt Lake plains of Utah, stopping in places like Cheyenne, where the train would stop literally in the middle of the town,” she recalls. “You had 20 minutes, so you could pop out to a cowboy bar and come back.  It was a great education, to see the landscape that those early pioneers crossed on foot or horse.  That gave me a little inkling of what it means to be an American, to be able to contemplate that journey, let alone make  it.”

AARP: And they came here with virtually  nothing.
Mirren: “Only their  dreams”

I ask if, after all this time, she feels like an American, and she shakes her head no. “The people who made America are the ones who came without return tickets.  They came, just launched into this world — Irish, Jewish and obviously Africans.  I always have a return  ticket.”

On her recommitment to the  stage:
“I didn’t want to be famous, but I wanted to be a really good actress,” she says. “I wanted to be recognized as a great theater  actress.”

On her commitment to playing  queens:
“Queens are good, it’s good to be queen.  I’m preparing to do a piece about Catherine the Great of Russia, an amazing monarch.  I mean, the reason certain queens are great to play is because they’re  powerful.”

On her thoughts of religion and  soul:
AARP: Your family used to discuss this question at dinner: Is there a soul?
Mirren: “I’m not religious.  So If I say yes, there is a soul, it’s nothing to do with religion or God.  But yes, I would say there is a spirituality in being a human being that is connected to the imagination in some  way.

On her current project, Collateral  Beauty:
“It’s a very strange movie, almost in the genre of magical realism, for lack of a better term.  It’s not so sort of obvious, which is what I rather liked about it — the concept that out of incredible tragedy and heartache and difficulty can come  beauty.”

She plays a part “exactly who I would have been, actually, if my career hadn’t been successful, working in a little art theater, an artist driven by her need to make  art.”

Kate Winslet on Helen  Mirren:
“You could sit and talk about anything with Helen, for hours,” Winslet says. “Anything from boobs to boys, work to what we were going to drink at cocktail hour.  And we would all sit and run our lines together.  Which is all you ever hope for on set.  She is everyone’s friend.  And she is out-of-control sexy and beautiful! We all wanted to make out with  her.”

Mirren on delaying marriage and forgoing having  children:
“A lot of it was luck.  But a lot of it was choice, absolutely.  So yes, I did very consciously choose my work over my relationships right up to the time that I met [my husband, director] Taylor [Hackford].  I was 38 when I met Taylor, pretty late in  life.”

“We got married in the end because we realized that we were going to be together forever,” she says. “We got married, ultimately, for legal reasons more than anything else.  Estate planning and other complicated things like that.  And our families, we sensed, wanted us to be married.  I always said I have nothing against marriage, it just wasn’t to my taste, like turnips.  It took me a very long time to come round to acquiring the taste.  I just had to meet the right  turnip.”

On why acting is  satisfying:
“I find the engagement in the imagination very appealing.”  In fact, it’s more than that.  Mirren says she considers her profession to be a sacred calling, one that required all of her body and soul, even as a young woman.  As she wrote in her autobiography, “The theatre became my religion, and I wanted to serve  it.”

About AARP The  Magazine
With nearly 36 million readers, AARP The Magazine is the world’s largest circulation magazine and the definitive lifestyle publication for Americans 50+. AARP The Magazine delivers comprehensive content through health and fitness features, financial guidance, consumer interest information and tips, celebrity interviews, and book and movie reviews. AARP The Magazine was founded in 1958 and is published bimonthly in print and continually online. Learn more at www.aarp.org/magazine/. Twitter:  twitter.com/AARP

About  AARP
AARP is a nonprofit, nonpartisan organization, with a membership of nearly 38 million that helps people turn their goals and dreams into ‘Real Possibilities’ by changing the way America defines aging. With staffed offices in all 50 states, the District of Columbia, Puerto Rico, and the U.S. Virgin Islands, AARP works to strengthen communities and promote the issues that matter most to families such as healthcare security, financial security and personal fulfillment. AARP also advocates for individuals in the marketplace by selecting products and services of high quality and value to carry the AARP name. As a trusted source for news and information, AARP produces the world’s largest circulation magazine, AARP The Magazine and AARP Bulletin. AARP does not endorse candidates for public office or make contributions to political campaigns or candidates. To learn more, visit www.aarp.org or follow @aarp and our CEO @JoAnn_Jenkins on  Twitter.