By Isabella Woods, Special for US Daily Review

Inventors create different devices so is it fair for them to be judged against one another especially when they lived in different centuries?

Steve Jobs and Thomas Edison have both been in the limelight recently. Jobs, because he died and was an extremely high profile character in global electronics and Edison, because he invented throughout his working life.

However, if you study the manner in which the two worked, many similarities seem to emerge, especially when you think about their career paths.

Let’s get the not-so-nice comparisons out of the way. Both Jobs and Edison have been described as difficult and controlling bosses who wouldn’t accept standards below their own from an employee. They both kept an iron grip on all that happened in their work zones. Both spent an inordinate time protecting patents, even those they had no direct use or plans for.

An easy and now amusing contrast starts with Edison’s patent on making movies. Everyone making a movie had to pay Edison a specific amount. This compares well with Apple’s approach to chasing anyone to the extreme over patent litigation if there is the slightest chance a rival has a feature that Apple believes it had a hand in. 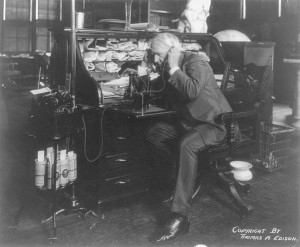 Edison was the inventor of the light bulb. Although we may have changed to an energy saving model in recent years, we still can’t do without it. Some iPhone users would claim the same. Edison invented both the phonograph and the motion picture camera (hence his grip on people making movies) and is known for improving the telegraph and the telephone. Apple via Jobs has taken the tablet computer and changed it into one of the most useful pieces of equipment available for all ages. It defines how we communicate or it did until Amazon’s Kindle Fire arrived, but that’s another story.

All of Edison’s inventions or advancements came when human lifestyle was evolving quickly and he helped to move it along even faster. Jobs’ iPhone took a useful tool and made it the gadget to hold and use for anyone who could afford one. Apple’s Mac computers are accepted as better machines than anything running Windows, but other software has prevented Apple from completely taking over the computing world.

While Edison invented the phonograph, Jobs gave us the iPod and the iTouch. Could we have got to the latter if we hadn’t found the former? Is it Edison who was the real inventor and Jobs the man who took good ideas and made them almost perfect, creating objects we can’t put down or are not prepared to do without?

How Long Will The Memory Last?

Clearly, Edison invented useful tools that made everyday life so much easier. His ideas have become natural in the way we conduct our daily lives. In a hundred, or even two hundred years, we’ll still need some kind of electricity and electric light. Will the people of 3011 be updating software on their iPhone model number 88? Perhaps the iPhone will be developed in ways we can’t imagine now. In a thousand years’ time maybe people will look back at Steve Jobs’ era and say he innovated and changed the way people lived in 2011, and was the catalyst for the way people communicated in 3011. After all, Edison didn’t really think about HD television or electricity on the moon, but they result from his inventions.

Perhaps the best comparison of the two men is how they affected other people. In the final analysis most of the people that worked with them wanted to; most wanted to stay for life and wouldn’t consider hiring a moving company. Most wanted to be part of human evolution. They both produced items we can’t do without. Some will argue that we can live without electricity and iPhones, but try taking them away from their owners. That’s why the grey haired geniuses – another trait they shared – will both be in the history books of the future.