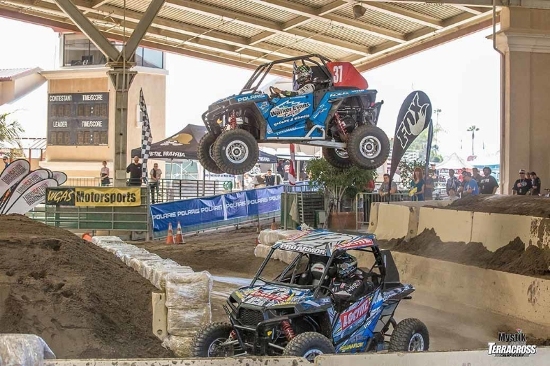 Terracross revealed today the list of sponsors for the 2015 season, and is pleased to announce its continued partnership with Polaris RZR, Mystik Lubricant’s, Walker Evans, GBC Tire, FOX and GoPro as well as many others alongside a new brand to Terracross, Keystone  Automotive.

“We are so pleased to have our key partners from top to bottom returning for another great season of Terracross,” said Joe Duncan, Terracross sport organizer. “We have great brands like Pro Armor, Rath Racing, Bad Endorsement, Lonestar, HMK and Holz Racing. We are also excited to be adding key non endemic and high profile industry leaders to the mix with brand names like PRP Seats, KC HiLites, Optimas Starters, and Rugged  Radios.”

In addition to the most challenging terrains and exciting courses for UTV racing, Terracross offers dynamic competition through its athletes who come from all different disciplines of  racing.

A few new faces to the Terracross Championship are successful action sport athletes Ronnie Faisst and Jeremy Stenberg, competing against other top athletes Colten Moore, Levi LaVallee, Chris Burandt, and returning Terracross champion Jason Luburgh. With the experience each of these and other athletes bring to Terracross, the upcoming 2015 season is bound to be exhilarating and impressive throughout the entire  championship.

“With these top action sports stars, celebrities and hero like personalities, the racing on the track is just part of the action at Terracross,” said Duncan. “With guys like Jason Ellis and Jeremy ‘Twitch’ Stenberg going at it already on social media, it is definitely going to make for some exciting racing on the  track.”

In addition to the new and pre-exiting partnerships and competitors for the 2015 season, Terracross is pleased take its events back to locations that provide the best courses for extreme competition and  entertainment.

“With our great venues and strong relationships with industry media like UTVunderground.com, ATVriders.com, ATV & SxS Insider, RZRforums.net, MadMedia, 4WheelDirt, Dirt Wheels and Wheels of Thunder Magazine, the 2015 season is positioned to have a breakout start in San Diego,” said  Duncan.

The Terracross season kicks off on June 25th and 26th at the San Diego Del Mar Fair at Delmar Fairgrounds. With nearly 75,000 fair attendees each day, the fairgrounds set the perfect stage for exposure and fan engagement with shows at 1pm and 5pm each day. Catch all the action from the first event on CBS Sports  Network:

Terracross events will be aired on CBS Sports Network. The first event in San Diego is free with a purchase of fair  admission.

The Terracross Championship features the best of off-road and action sport athletes competing on rough, tough and muddy courses complete with obstacles such as rocks, logs, crossover jumps and tight turns. With events televised on CBS Sports, spec Polaris RZR XP 1000 vehicles, and top athletes from diverse racing backgrounds, Terracross has become one of the premier racing series in the  world.