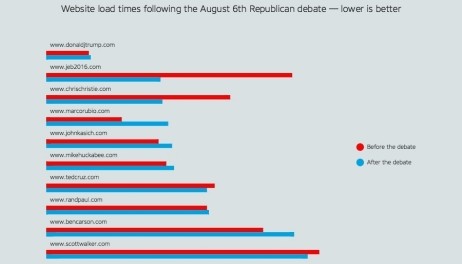 There were no fatal gaffes or significant surprises in the first Republican debate of the 2016 presidential race, and while it will take new polling to know how the candidates actually fared, there is a clear winner in the campaign website speed race. The Donald Trump site was the fastest of the ten candidates in the debate— both leading up to and during the debate, as measured by AppDynamics, a leading application intelligence company. The site was among the lowest in total page weight — the amount of data being pushed through to users — which is likely a contributing factor to its consistent speedy  performance.

Among the other candidates, Jeb Bush’s site was more than twice as fast on debate night as it was in the days before, likely due to some late content-trimming. Prior to the debate, the Bush site trailed the pack in second-to-last place, but by debate night, it moved up almost to the top, trailing only the Trump campaign site. Chris Christie’s campaign site also saw a big performance gain, loading more than 58 percent faster on debate night than during the week before, again likely because of last-minute page-weight  reductions.

On the flip side, Marco Rubio’s campaign site saw a significant slowdown by the time the debates were over, with the homepage slowing nearly 62 percent compared to the pre-debate measurement on  Wednesday.

“The cable news pundits seemed to be impressed with Rubio’s debate performance,” said Peter Kacandes, senior product marketing manager at AppDynamics. “We can’t know for sure, but it’s possible that his site got a lot of traffic as a result, and slowed down under the load. We’ll be looking at the site after the debate excitement has died down to see if it recaptures speed with a more normal  load.”

The speed gains by the Bush and Christie sites had nothing to do with the candidates’ performance in Cleveland, but more with structural changes made to their sites in time for the debates. Campaign web teams have learned from the most recent presidential elections that a top-performing site that delivers solid user experience is essential for visibility, fundraising, and messaging. It is to the Bush and Christie teams’ credit that they were optimizing performance right up to the time their candidates stepped  onstage.

“The Bush web team dramatically cut the weight of their homepage in time for the debate,” Kacandes said. “Just the day before, the site homepage weighed in at a hefty 7.8 megabytes, but on debate night, it was down to just over a single megabyte. That’s a huge reduction, and it delivered results with a homepage that loaded twice as fast. Similarly, the Christie homepage shed nearly two-thirds of its weight, going from six megabytes to just over two megabytes, and realized a big gain in speed as a  result.”

AppDynamics measured the ten candidates’ websites from two locations, one on the East Coast and one on the West Coast, using the Google Chrome web browser. While the actual experience of end users varies due to a variety of factors, the synthetic measurements that AppDynamics provides offer an accurate, relative ranking of the performance of the candidates’  websites.

AppDynamics will be measuring all the campaign websites of all the presidential candidates every month throughout the election  cycle.

The AppDynamics Application Intelligence Platform is a comprehensive solution enabling companies and government entities to maximize business and application performance. The platform is designed and architected to help give business and government users the confidence that their applications are running at their best, to give IT personnel the operational visibility and control they need, and to give end users the great experiences they’ve come to expect and  demand.

For regular news and information about AppDynamics and the APM market, like and follow the company  on: