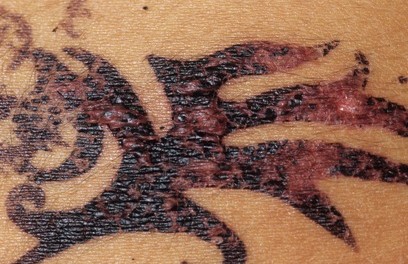 By U.S. Food and Drug Administration, Special for  USDR

The summer vacation season is here… time to pack your swim suit, hit the beach, and perhaps indulge in a little harmless fun. What about getting a temporary tattoo to mark the occasion? Who could it hurt? It could hurt  you.

Unlike permanent tattoos which are injected into the skin, temporary tattoos marketed as “henna” are applied to the skin’s surface and usually last two to four weeks. Henna is a reddish-brown coloring made from a flowering plant that grows in regions of Africa and Asia. For centuries, people have used henna to dye skin, hair, and fingernails. Henna body art – sometimes also called mehndi – is still used around the world to decorate the skin in cultural festivals and  celebrations.

However, just because a henna tattoo is temporary that doesn’t mean it is risk free. Today, so-called “black henna” is often used in place of traditional henna and is potentially harmful. Inks marketed as “black henna” – or sometimes simply as “henna” – may actually be hair dye or a mix of henna with other ingredients. The extra ingredient used to darken henna is often a coal-tar hair dye containing p-phenylenediamine (PPD), which can cause dangerous reactions in some people. By law, PPD is not permitted in cosmetics intended for staining the skin. Henna is permitted as a hair  coloring.

You may see “black henna” used in places such as temporary tattoo kiosks at beaches, boardwalks, and other holiday destinations, as well as some ethnic or specialty shops. While states have jurisdiction over professional practices such as tattooing and cosmetology, that oversight differs from state to state. So, depending on where you are, it’s possible no one is checking to make sure that the artist is following safe  practices.

A number of consumers have learned the risks the hard way. Reactions may occur immediately after the application of “black henna” temporary tattoos or even up to two or three weeks later. Reported problems include redness, blisters, raised red weeping lesions, loss of pigmentation, increased sensitivity to sunlight, and even permanent scarring. Some reactions have led to medical treatment, including emergency room visits and ongoing skin sensitivity that can affect day to day  activities.

Some people may experience cross-sensitization, meaning that because of a previous exposure and a bad reaction to that chemical, they become sensitized (allergic) to related compounds, such as rubber and other latex products, certain medications, hair dye ingredients, and textile  dyes.

If you have a reaction to or concern about a temporary tattoo or any other cosmetic, contact your health care professional. In addition, the U.S. Food and Drug Administration (FDA) asks you to contact FDA’s Safety Information and Adverse Event Reporting Program at 1-800-FDA-1088 or online at http://www.fda.gov/Safety/MedWatch/default.htm. You can also contact an FDA consumer complaint coordinator in your area. A list of coordinators can be found at:  http://www.fda.gov/safety/reportaproblem/consumercomplaintcoordinators