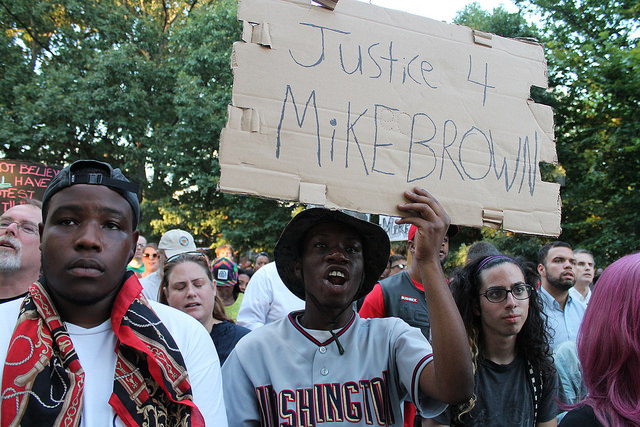 The chaos erupting in Ferguson, MI is the result of creeping civic decay in public life. Over the years, American civilians have increasingly declined in their levels of civic engagement, knowledge, participation, and awareness.

Civics is the business of citizenship. It is summed up with three things: personal values, knowledge of the system that keeps our world spinning, and a skill set to pursue a goal that gets others to go into business with you towards attaining that goal.

The whole business of politics has demotivated civilians away from this subject, propelling an epidemic where too many people are illiterate in power.

Practicing power requires that communities re-learn how it functions and affects civilian life. The perceptions and assumptions surrounding the series of events that led a cop to shoot an unarmed teenager in Ferguson, Missouri 6 times has ricocheted across the country.

It should not matter that the teen was black and the cop white, but that seems to be the focus.  What should have initially mattered to the American people is that an unarmed person was shot six times by a police officer. Obviously, there is something broken between the relations of citizens and the governing authorities overseeing them.

Is the event in Ferguson a contradiction to justice or is this a case of haters on a basis of biases? No matter what it is, two wrongs do not make a right. The aftermath following the death of Michael Brown generated widespread pandemonium across the Ferguson community.

What started out as civic protests by concerned locals turned into violent riots? Anger is a blind emotion, and this event is an example of impulsive reactions and actions lacking moral guidance.

Bad decisions made by the Ferguson police do not warrant belligerent acts of rioting and thievery by angry locals as acceptable. This conflict goes deeper than passionately blind acts of outrage. It has victimized innocent, small business owners of the Ferguson community.

How can people–who claim to be fighting for the rights of another–transgress against the rights of their fellow man? The innocent, small business owners who had their businesses destroyed for no reason is a very shameful reality that has resulted from the fallout of this controversially mismanaged incident.

Small businesses are the backbone of our economy! By hurting others we are hurting ourselves. The inability of the police force to follow procedure and then the local community’s impulsive response to the incident has reflected poorly upon both parties.

We cannot control what happens to us in life, but we can control how we react to what happens. A family has lost a loved one, and a man’s life is in ruins. Is it truly possible for justice to be served in such a case?