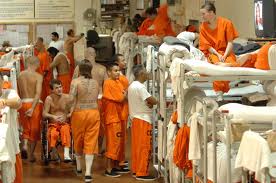 These findings are based on the first-ever National Former Prisoners Survey (NFPS), a part of BJS’s National Prison Rape Statistics Program which has collected corrections administrative records of reported sexual violence or allegations of sexual victimization directly from victims since 2004. The NFPS is representative of 510,800 former state prisoners who were under active parole supervision at midyear 2008.

The nature and pattern of sexual victimization observed in the former prisoner survey are similar to those found in the previous NIS, 2008-09.

Among former state prisoners, the rate of inmate-on-inmate sexual victimization was at least three times higher for females (13.7 percent) than males (4.2 percent).

Among all victims of inmate-on-inmate sexual violence, a quarter said they had been physically held down or restrained and a quarter had been physically harmed or injured. About 29 percent of all victims reported bruises, black eyes, sprains, cuts, scratches, swelling, or welts from one or more incidents involving another inmate. Nearly a quarter (23 percent) also reported more serious injuries, including anal/vaginal tearing (12 percent), chipped or lost teeth (12 percent), being knocked unconscious (8 percent), internal injuries (6 percent), knife/stab wounds (4 percent) or broken bones (4 percent).

Although any sexual contact between staff and inmates is legally nonconsensual, former prisoners said some incidents were unwilling and some were “willing.” An estimated 1.2 percent of former state prisoners reported unwilling sex or sexual contact with facility staff, and 4.6 percent reported an incident that was “willing.”

The NFPS provides the first systematic data available on sexual victimization in community-based facilities. Among the estimated 65,500 former inmates who served time in a halfway house, residential treatment facility, or other pre-release center before their release from prison,  two percent said they had been sexually victimized while in such a facility.

Rates of alleged sexual victimization did not vary among commonly cited characteristics of correctional facilities, such as the facility’s size or age, crowding, inmate-to-staff ratios, or gender composition of staff. Rather, victimization rates were higher for males in facilities under a court order, facilities that had reported a major disturbance in the 12 months prior to the most recent facility census, and facilities that housed general population.

However, victims and non-victims did not differ in their current employment (64 percent employed) or housing arrangements (92 percent in a house, apartment, trailer or mobile home).

The report, Sexual Victimization Reported by Former State Prisoners, 2008 (NCJ 237363), was written by Allen J. Beck of BJS and Candace Johnson of NORC. The full text of the report, related documents and other BJS statistical resources can be found on the BJS website at http://www.bjs.gov/.