By Kimberly Morin, Contributor for US Daily Review.

Check out Kimberly Morin’s recent interview on the Price of Business radio show on this topic. 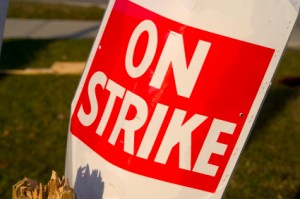 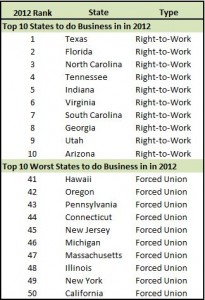 It’s interesting that unions always claim living and workforce quality are better in Force Union states but the actual people creating the jobs – CEOs – seem to disagree.  If you look at the bottom states in which to do business – Michigan, Massachusetts, Illinois, New York and California you’ll note they all have a few things in common aside from being forced union states – they are all states with high regulations, higher overall taxes and high unionization.  From CEO Magazine:

“It may be no accident that most of the states in the top 20 are also right-to-work states, as labor force flexibility is highly sought after when a business seeks a location. Several economists, most notably Ohio State’s Richard Vedder and Harvard’s Robert Barro, have found that the economies in R-to-W areas grow faster than other states, have higher employment and attract more inward migration.” 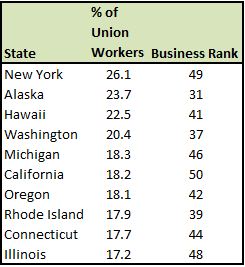 This survey cannot come as a surprise to those who have been watching the absolute thuggery that unions across the country have been using against states where Governors have decided to give workers a choice (Wisconsin, Indiana and Ohio come to mind).  Right-to-Work doesn’t end unions but gives workers the choice of whether or not to be a part of a union without being forced to pay fees if they decide to opt out.  If workers want to unionize in Right-to-Work states they have that option and right.  On the flip side, in Forced Union states, workers who do not wish to belong to the union are still forced to pay union fees if they want to keep the job.  Why would any business want to put themselves in the position of dealing with outrageous demands from union bosses who aren’t providing the best workers and who often resort to violence and destruction if they don’t get their way?

In 2009, the National Right to Work League published a fact sheet showing the number of taxpaying families fleeing from Forced Union states to Right-to-Work states. “Right to Work laws protect the freedom of both private- and public-sector employees to keep and hold a job without forking over dues or fees to a union that is recognized as their “exclusive” (actually, monopoly) bargaining agent. Unless they are protected by a state Right to Work law, independent-minded employees have little or no power to hold union bosses accountable by withholding their financial support. And when employees have no personal freedom of choice, union bosses have little incentive to tone down their class warfare.  Employees are consequently far less likely to reach their full productive potential and reap the accompanying benefits”.  It appears that CEOs are catching on to this fact as well.

Kimberly Morin is a Conservative political activist, researcher and policy analyst who writes for Examiner, blogs for Conservative Nexus and Modern Conservative and is an occasional contributor to Western Free Press.  Her personal blog is www.granitestateindy.com.