The Charleston region experienced the largest growth in manufacturing jobs of any US metropolitan area at 14.4%, from Q1 2010 to Q4 2011, according to a May report from the Brookings Institution on trends in manufacturing location production.

“Charleston is growing manufacturing jobs at a faster rate than any other metro in the country because this region offers the expertise and strategic global connections needed to compete in America’s renewed manufacturing age,” said David Ginn, President & CEO, Charleston Regional Development Alliance, the region’s economic development organization. 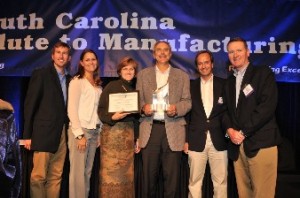 Boeing’s new $750 million aircraft manufacturing plant in North Charleston exemplifies the high growth rate of jobs in the region, creating more than 3,800 jobs and approximately 11,000 indirect jobs during the same 2010-2011 time period; a prime reason for why the unemployment rate in Charleston sits well below the national average at 7.1%.

Manufacturing companies rely on Charleston’s skilled engineers and technicians, which is why the region is also home to more than 100 automotive manufacturers like Robert Bosch, Daimler and Force Protection, collectively employing over 6,500 workers.

Company investments and the jobs they bring can also be attributed to the state’s innovative workforce training program, ReadySC, which trains new employees at little or no cost to the company.

And infrastructure plays a key role in attracting manufacturers. The Port of Charleston provides easy access to the global supply chain with direct service to more than 150 countries worldwide, and the only channels in the Southeast deep enough to accept Post-Panamax ships.

“This region’s growing aerospace cluster, established automotive industry and deepwater port is not only attracting talent at a rate we have never seen, but these jobs offer some of the highest wages in the state,” Ginn added. “We are seeing increased investment each year and expect the growth trend to continue throughout the next decade.”