Ancient handwritten texts of the words that shaped the future of the Western world will go on view this spring in the Mandell Center at The Franklin Institute in the profoundly moving exhibition, Dead Sea Scrolls: Life and Faith in Ancient Times.  PECO is the Presenting Sponsor of the exhibition, which opens to the public on May 12.

Included among the 2,000-year-old writings, which are on exhibit in North America for the first time, are handwritten passages from Genesis, including the resonant opening words, “In the beginning God created the heaven and the earth.” 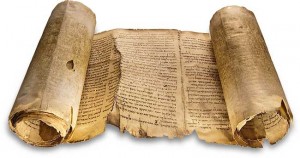 In addition to the Biblical texts, which date from the first century BCE (Before the Common Era) and the first century CE (Common Era), Dead Sea Scrolls: Life and Faith in Ancient Times provides a rich, multimedia backdrop mixing film and archaeological artifacts that enhance today’s understanding of one of the most compelling periods in history. This was the time when ancient Israel emerged, various sects of Judaism began to consolidate, Roman forces ruled the Holy Land, and the birth of Jesus was at hand.

The scrolls in the exhibition contain passages from Genesis, Exodus, Isaiah, and other books of the Old Testament, as well as non-biblical writings. They range in subject from the creation of the earth to Moses’ confrontation with Pharaoh to Isaiah’s prophecy that “The wolf shall live with the lamb the leopard shall lie down with the kid.” Most of the texts are written in Hebrew.

Dead Sea Scrolls: Life and Faith in Ancient Times is created by the Israel Antiquities Authority (IAA) from the collections of the Israel National Treasures and features the most comprehensive collection of ancient artifacts from Israel ever organized. It is produced by Discovery Times Square and The Franklin Institute.

“There are few periods in history that we can look back to as moments that defined the emergence of a world-changing civilization or a culture,” said Dennis M. Wint, Ph.D., President and CEO of The Franklin Institute. “The Biblical era, even 2,000 years later, still impacts our lives today. We are privileged to bring Dead Sea Scrolls: Life and Faith in Ancient Times to our visitors from Philadelphia and the world over and to create a dynamic exhibition that brings to light the roots that so many of us share.”

“In many cases, we know the past by examining and interpreting objects from daily life and ancient written documents,” said Dr.Risa Levitt Kohn, Professor at San Diego State University and exhibition curator. “The exhibition reveals in ancient pots, coins, weapons, jewelry, and handwritten texts a record of extraordinary human achievement, which together constitute a momentous contribution to our cultural legacy.”

Among the over 500 artifacts from the Biblical-to-Byzantine Period in Israel are examples of delicate jewelry, deeply carved architectural capitals, pottery shards bearing royal seals, weapons including slingstones (which are most likely similar to the one David used to fell Goliath), and many objects from archaeological excavations in Jerusalem that have not been publicly exhibited until recently.

The stone will be exhibited in a scale recreation of a section of the Western Wall, and prayer slips left on the stone during the exhibition will be sent to Jerusalem, where they will be placed in the Western Wall itself.

Beyond the wealth of objects and materials that speak to the lives and practices of people during these crucial centuries, the centerpiece of Dead Sea Scrolls: Life and Faith in Ancient Times will be the presentation of 20 ancient Biblical texts (ten scrolls at a time, in two rotations) that are part of the miraculously preserved trove known as the Dead Sea Scrolls. The scrolls are believed to date from around 250 BCE to 68 CE and were discovered in a group of caves near Khirbet Qumran, close to the northwestern shore of the Dead Sea in Israel.

The first cache of scrolls was discovered in 1947 when a Bedouin shepherd casually tossed a rock into a cave and heard a pot shatter. Over the following eight years, archaeologists excavated a series of caves and found thousands of parchment fragments that included the oldest known copies of the Hebrew Bible. The parchments, some no larger than a postage stamp, were pieced together during the decades that followed.

The identities of the people who wrote the Dead Sea Scrolls remain unknown. Many scholars believe that they were written by members of a sect that broke away from mainstream Judaism and lived in the desert from the third century BCE until 68 CE, when their community was destroyed by the Romans. Other scholars believe that the Dead Sea Scrolls also include writings from other areas, including Jerusalem. Whatever their origin, they provide the most complete existing record of these writings that changed the world.

The story of the discovery and conservation of the scrolls will be told in the exhibition in a short video.

The discovery of the scrolls was hailed as the most important archaeological find of the 20th century for a number of reasons. Even at the time the Dead Sea Scrolls were written, scrolls were rare, though writing was fairly common in Egypt, Greece, and the Middle East during the period. Most people were illiterate, and papyrus and parchment were expensive. Of the few scrolls that were created, even fewer survived, since parchment is very fragile. In addition to destruction in fires, floods, or battles, parchment can be damaged by humidity and light. The age of these scrolls is astonishing: the next-oldest surviving parchment scrolls bearing the words of the Bible date from nearly 1,000 years later.

In addition to part of Genesis I, which recounts the creation of the universe, the exhibition presents the vision of Isaiah, in which he prophesies that beasts of prey will coexist peacefully with those that are vulnerable. The sheer beauty of the language that dates back over 2,000 years is found again and again throughout the texts:

In the year six hundred of Noah’s life, in the second month, on the first [day] of the week, on its seventeenth [day], on that day all the springs of the great abyss were split and the sluices of the sky opened and rain fell upon the earth for forty days and forty nights.

According to the organization’s statement, the Franklin Institute is “located in the heart of Philadelphia, The Franklin Institute is a renowned and innovative leader in the field of science and technology learning, as well as a dynamic center of activity. Pennsylvania’s most visited museum, it is dedicated to creating a passion for learning about science by offering access to hands-on science education. Considered one of the great science centers in the nation and the world, The Franklin Institute is known for blockbuster exhibits, one-of-a-kind theatrical experiences, and cutting-edge community learning with national influence. All are aimed at explaining science in ways that impact people’s lives. For more information, visit www.fi.edu.