The American Red Cross is helping people across the country as flooding threatens residents from the Midwest to New England while wildfires in the West are forcing people to leave their neighborhoods.

Weather experts predict heavy rain today in the Midwest, Tennessee and Ohio Valleys and Northeast, leading to flooding and flash flooding warnings in multiple states. The Red Cross is working closely with local officials to monitor the fires and flooding, and is prepared to respond if additional areas need assistance. 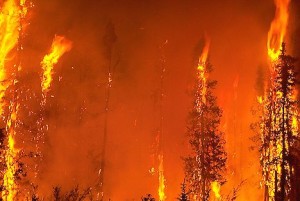 “Red Cross workers are helping people in several states where floods and wildfires have forced residents to flee their homes,” said Trevor Riggen, vice president of Disaster Operations and Logistics for the Red Cross. “Right now, we’re focused on making sure everyone has a safe place to stay, but we’ll also be there to help people get back on their feet after the flood waters recede and the wildfires are extinguished.”

Red Cross workers are providing shelter, meals, relief supplies and other support to residents of Tennessee, Georgia, Missouri, Kansas, Wisconsin and New York where flood waters forced people to leave their homes. In Tennessee, the Red Cross opened shelters after flash floods in the Nashville area affected hundreds of residents in several counties. In Georgia,Missouri and Kansas, the Red Cross opened shelters for people ordered to evacuate after several days of storms dropped over a foot of rain in some areas.

WILDFIRE SAFETY If wildfires are possible in someone’s community, they should be ready to evacuate quickly and pack an emergency disaster kit including water, non-perishable food, a flashlight, battery-powered or hand-crank radio and extra batteries, a first aid kit, medications, sanitation and personal hygiene items, important papers and cell phones and chargers, extra cash and maps of the area. They can also download the free Red Cross Wildfire App to get the latest fire news from local, state and federal agencies as well as access to preloaded information about what to do before, during and after a wildfire. The app is available in the Apple App Store and the Google Play Store for Android by searching for American Red Cross.

HOW TO HELP To help people affected by disasters like wildfires and floods, as well as countless other crises, people can make a donation to support American Red Cross Disaster Relief. Donations enable the Red Cross to prepare for and provide shelter, food, emotional support and other assistance in response to disasters. People can donate by visitingwww.redcross.org, calling 1-800-RED CROSS or texting the word REDCROSS to 90999 to make a $10 donation. Contributions may also be sent to local American Red Cross chapters or to the American Red Cross, P.O. Box 37243, Washington, DC20013.”