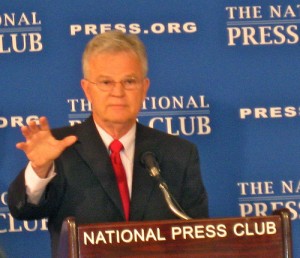 Virtually everyone who has seen Jimmy Stewart’s Mr. Smith Goes to Washington, loves this movie. You could care less about politics, but if you have a heart, you will find this a touching film about an honest politican trying to clean up Washington very powerful.  Recently I interviewed former Louisiana congressman and governor Buddy Roemer on my show, the Price of Business and I was reminded of the Frank Capra film as I interviewed this idealistic candidate.  Roemer is disgusted with “business as usual” and has taken a position that should draw considerable favor of voters, if not the dollars to reach them.  Roemer believes that US politics has become poisoned by the huge amounts of money behind the elections.  This is not a novel position. In fact, virtually every modern candidate has discussed the problem of big business influencing politics. But Roemer is different in that he has made a commitment to not take a contribution of more than $100.  His idealism is refreshing, if not naive, in a world in which money clearly rules the world of politics.  I don’t agree with Roemer on everything, but I do believe this country remains in serious trouble if vote buying — by special interests when it comes to politicians and by politicians of voters through government programs — is not brought to halt.  In this two segment interview, Roemer lays out the clear challenges he faces as a candidate in segment one and how he is different from his opposition in segment two.  I will say, that when someone with the depth of experience such as his is being ignored by the political establishment and media, you must wonder how big of a role his view on campaign financing is playing: