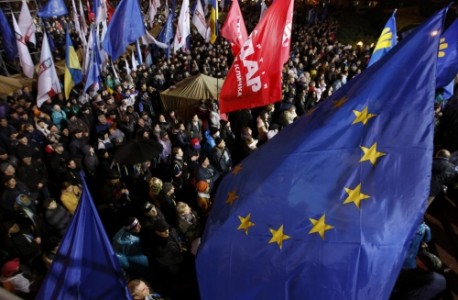 The recent trade deal part of the agreement with Russia and the recent choice of the Ukraine to form a closer relationship with Russia instead of with the EU may have quite a simple answer. The Ukraine not only relies on Russia for its natural gas supplies to keep its citizens warm during the harsh winter but also to keep factories running. Many of us have forgotten that a few short years ago Russia cut off natural gas during the winter months to Ukraine; their explanation was that their neighbor had essentially not paid its gas bill. This caused a crisis across Europe since eighty percent of European countries obtain their natural gas from Russia via the Ukraine. The crisis created by cutting off the gas was catastrophic to many of the former eastern bloc countries who still lacked the Infrastructure or storage facilities to last more than a few days during such a crisis. Many citizens across the eastern bloc suffered devastating consequences due to the winter weather, including economic damage from the temporary closing of factories in these already struggling countries.

One of the key parts of the resent agreement signed by the Russian and Ukrainian governments involved a reduction in the price of natural gas by one third; a savings that represents more than 5 billion dollars in the Ukrainian economy. This could have a staggering result on an economy which is struggling to grow as the whole Euro zone contracts. With the reduction in gas prices it gives the country an opportunity to reduce its unemployment; which represents an opportunity to weaken the stance of the protesters in independence square who in part are protesting for improved economic conditions. This economic change also allows the country to make some headway on its 135 billion dollar debt, since, as part of the deal; Russia has essentially offered to pay 15 billion dollars of Ukrainian debt.

While this may seem like a win for the struggling Ukraine, this deal moves the country away from becoming a member of the European Union; which seventy three percent of Ukrainian citizen support. The EU represents a market of more than 500 million people, and more than 250 million of those people are citizens of developed nations with the prosperity to help propel Ukraine forward. Being a member of the EU presents few barriers to economic activity, namely allowing Ukraine the ability to adopt the Euro. This would allow Ukraine to borrow money at relatively low interest rates.

However it would seem that the Ukraine has opted to take a quicker road to economic stability. The Ukrainian government has opted to receive 15 billion dollars up front from the Russian government; a move they claim that has prevented the Ukraine from tumbling into a monetary and economic freefall. Instead of accepting World Bank and IMF funds whose requirements would help the Ukraine to build a more stable economic system. Opting to receive 15 billion from the Russian government is much like Greece opting to receive debt relief from Germany. In the long run it is like a child with candy; the candy will soon be gone and when the sugar high ends the economic woes will be far worse than before.

It appears as though the former Russian subjects are slowly migrating back into the arms of their former masters, ensuring that Russia has a buffer state between itself and the EU. The Russians have made the deal with the Ukraine so sweet that it is hard for the Ukrainian government to ignore; but have also created an opportunistic situation for themselves by making it impossible for the Ukraine to enter the EU. If Ukraine cannot join the EU, they cannot become part of NATO. Thus, NATO will not be knocking on Moscow’s gates any time soon. The Kremlin has convinced the Ukrainians to make a deal with the devil; exchanging long term independence for temporary economic growth.

Born in Houston, Texas to an American father and German mother, Cedric is both a German and US citizen. He holds a degree in mechanical engineering from Prairie View A&M university and owns a resale business. Cedric spends most of his vacation days in Europe, and his free time is spent enriching himself in the latest technology. By day, he works as a Business & Systems Integration Analyst. As a columnist, his main focus is on European affairs and technology. He can be found on Facebook or LinkedIn.