In his new book “Tea Party on Safari: The Hunt for American RINO” (published by iUniverse), author and political activist Greg Fettig chronicles his participation in a nationwide campaign to effect political change through the Tea Party.

In 2010, Fettig orchestrated a campaign to oust Indiana Republican Senator Richard Lugar. Eighteen months later, Fettig and his compatriots declared victory when Lugar was defeated in the May 8, 2012 Indiana primary elections, an election reported on by the New York Times. His success in that campaign, he believes, has inspired other Tea Party activists across the nation to target other politicians they deem to be Republicans-in-name-only (RINOs).

An excerpt from “Tea Party on Safari”:

“At five minutes noon, January 20, 2011, I was waiting in the bar of the Wyndham Garden Hotel as instructed, and the Snake was late. I proceeded to the front entrance to see if he had had second thoughts and would pull a no-show. Although I had no idea what the Snake looked like, I believed he would not be difficult to spot. It was ten minutes past noon when a black Lincoln Town Car pulled up to the front portico of the hotel and the driver got out and opened the rear driver-side door of the car. Out stepped a man of diminutive stature sporting a black, slicked-back mane and dressed in a black overcoat. I thought for a moment that perhaps the Mafia had arrived, and I hurried back to the bar to appear bored and ready to leave. The Snake approached me with little warmth, although it was the dead of winter, and the creature couldn’t be faulted for conforming to its cold-blooded nature.” 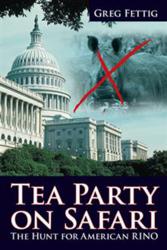 Fettig hopes his book will prove an inspiration to other Americans. “Real change will only occur when the citizenry rises up an takes a key role in affecting positive change,” he says. “If two ordinary citizens can mount an army of grassroots activists to defeat a six-term senator, others can do the same.”

Greg Fettig is a lifelong Hoosier and small business owner. He is president of America ReFocused and cofounder of Hoosiers for a Conservative Senate. As a political activist, he has been involved in rallies in Washington, Australia and Israel, and has been interviewed by national and international news organizations. Fettig lives in Indiana.