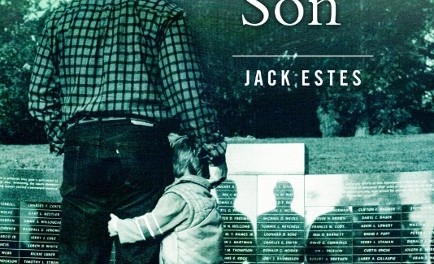 By  Jack Estes, Special for  USDR

Masterfully crafted by Jack Estes, ‘A Soldier’s Son’ calls on the author’s own experiences in Vietnam to tell the gut-wrenching story of a PTSD-riddled veteran, who breaks to the core of his being when his son is sent to the war in Iraq. He has a plan to “save” him; a plan that will put protagonist Mike Kelly’s own life on the line and rekindle the memories of Vietnam that threaten to destroy him. A Novel this profound has naturally been received with critical acclaim. AuthorKaren Karbo said, “Jack Estes is a master at capturing the human costs of war, from the battlefield to the front rooms of America. As riveting, as it is lyrical, A Soldier’s Son will not be  forgotten.”

Kirkus Reviews wrote, “Estes skillfully presents the effect of war on families both in the moment and decades later. His characters are rich and complex. Battle scenes are vividly drawn, keeping the reader caught up in the action. A complex novel of the past and future, fathers and sons, and war and redemption, and the devastating impact of large scale violence on both the perpetrators and the  victims.”

Karl Marlantes, author of the New York Times best- selling Vietnamnovel Matterhorn, wrote, “All veterans and their loved ones should read this story of a father’s love, loss, and personal courage, both at home and at  war.”

Lake Oswego Oregon – While he’s now an award-winning writer,Jack Estes was a decorated war hero before the age of 20. Estes served with the United States Marine Corps in Vietnam between 1968-1969; regarded as the bloodiest years of the long war. He was left wounded, emotionally scared, yet a true American  Hero.

It’s no surprise, then, that Estes’ novel about a fictional Vietnamveteran has earned accolades of its own. Estes won’t say how much of ‘A Soldier’s Son’ is based on his own life, but one thing is for certain – his portrayal of PTSD and living the horror of war’s aftermath is too vivid and gut-wrenching to be thoroughbred  fiction.

In 1968, Mike Kelly’s chopper is shot down at night, over the jungles of Vietnam. The crew is dead. Most of his team is dead and the enemy is near. Today it is 2004, and Mike is a successful author who writes for the daily newspaper. He lives in a big house on the lake with his wife, Claire, college aged daughter, Madie and 18 year old son, Mick. Not all is well in the Kelly home. Mike is haunted by Vietnam. He fights hard to control his memories. With the beginning of the Iraq war, Mike’s symptoms of PTSD are tearing at the family. Claire is threatening to leave unless he receives treatment for PTSD and takes medication to calm him. Madie feels Mike doesn’t love or understand her and Mick is sick of him trying to control his life. When Mick and his best friend Griff join the marine corps and are sent to Iraq, Mike implodes. He travels to Iraq as an embedded reporter in a desperate attempt to save his  son.

“I’ve actually been back to Vietnam several times since returning from the war,” explains Estes, whose recent Memorial Day essay was featured in the Wall Street Journal. “These trips took doctors and nurses over to provide care for the poor and needy; it was my way of correcting the wrongs of the war and embarking on a bold journey of therapy. Believe me, Vietnam stays with you for life. I wanted to capture this on paper, as a man watches his own son depart for a warzone and history repeats itself beyond his  control.”

Continuing, “Feedback has been overwhelmingly positive, with people really appreciating and understanding the book’s depth, from both a factual and emotional standpoint. Many Vietnam veterans sent their sons off to fight in Iraq, and this story is as much theirs as it is  mine.”

Estes is correct, his work has been received with critical acclaim. For example, Emmy nominated writer Cynthia Whitcomb comments, “Sometimes we forget that there is only one generation between Vietnam and Iraq. That some of the boys who survived the first, lived on to have sons sent into a new horrific kind of warfare. When a middle-aged father braves the battlefield of Iraq to save his son, it is not just an act of courage, but an act of great love. There have been beloved writers lost too young in wars. Rupert Brooke in WWI comes to mind here. Sometimes we are lucky enough to have a talented writer survive war with the skill to write about it for all of us to understand his experiences and war itself. And sometimes a writer is gifted enough to transform his hell into art. Jack Estes is one of these, now with an unforgettable, powerful book about war and about what it is to be a  father.”

Lindsey Nelson adds, “A Soldier’s Son is a fast-paced, exciting novel. The characters deal with immense inner turmoil while action-movie-worthy scenes swirl around them. I’ve never read a book that did such an excellent job describing intense war scenes with such great detail that I could picture clearly in my mind’s eye. This should certainly be made into a film. Thank you, Jack, for putting what our soldiers do for our country into perspective for  me.”

For more information on the author and his work, visit the official website:  http://jackestes.com.

Jack Estes is also the author of the critically acclaimed book ‘A Field of Innocence‘, a memoir of his service in Vietnam in 1968-69. His articles and essays have appeared in ‘Newsweek’, ‘LA Times’, ‘Wall Street Journal’, ‘Chicago Tribune’ and the ‘Oregonian’.

He has written a book of fiction titled ‘Searching for Gurney’ that has not been published, but excerpts were used to win a Fellowship at Squaw Valley Writers Conference, to be accepted at Breadloaf and to take First Place at Willamette Writers C onference.