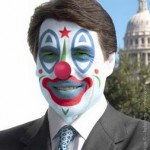 Despite a firm pledge to the contrary only some months earlier, Texas governor Rick Perry formally announced his bid for the Republican nomination on August 13th. Being painfully accustomed to his long record of duplicity and frequent publicity stunts, few Texans were shocked by this underwhelming proclamation. Nevertheless, the former male cheerleader has made a considerable splash in some media circles, leading many to already view him as the main contender against current head-of-the-pack, Mitt Romney. Unfortunately for Mr. Perry, his mismanagement of state affairs and sheer lack of any coherent political ideology or original ideas are unlikely to make up for his outstanding head of hair.

Over the past few years the governor has worked very hard to manufacture a public image as a tough talking, boot wearing, no nonsense, straight shooting cowboy. He’s executed several men who appeared to be innocent, vetoed a ban on executing the mentally retarded, and recently boasted of blasting a coyote to death with hollow points from his laser-sighted pistol while jogging through an affluent Austin suburb. Perry has also repeatedly fired shots at Washington for their out of control spending. With characteristic bravado and fanfare, he publicly refused to accept Federal stimulus money. Despite this phony refusal, most of the money was quickly accepted and Perry used much of it to balance the state’s budget. (A feat he’s very proud of).The governor forcefully demands a limited federal government that will leave Texas alone, while simultaneously demanding that the Feds increase their presence on the border and in the wake of natural disasters. He has even hinted at a revival of the Civil War, insinuating that Texas should again secede from the union. As he panders across Iowa, Perry is currently targeting Romney for his support of socialized medicine in Massachusetts.

Going after Romney’s Achilles heel may come back to bite him in the rear, however. What few people know is that Perry was formerly a liberal democrat, serving as campaign manager for Al Gore’s 1988 presidential primary bid. He changed parties when it became politically expedient. That said, the former Vice President would certainly be disappointed with his former democratic comrade when it comes to environmental issues. Perry is an unabashed critic of Global Warming. He has called it “a scam” and often asserts that there is “no scientific consensus” on the issue. Admittedly, his scientific credentials are impressive. His degree in Animal Science and solid 2.2 GPA ensure his understanding of the research. Nevertheless his denial is at odds with virtually every legitimate climatologist on the planet. Perry also opposes any attempt at reduction of greenhouse emissions and has made little effort in reducing pollution during his 10-year reign. 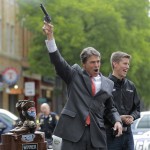 Education has suffered more than perhaps any other sector. Texas teachers can expect a salary significantly lower than the national average and the results speak for themselves. Whether it’s graduation rates, SAT scores, or teen pregnancy, Texas consistently comes in at the bottom of the barrel nationally. Massive teacher layoffs this year (due to Perry’s slash and burn austerity cuts) leave little in the way of optimism on that front. Furthermore, the cost of university tuition has skyrocketed during his reign. In 2003 governor Perry approved tuition deregulation, promising that tuition would fall as schools competed with one another on the open market. Naturally, the effect was the exact opposite. Texas universities simply raised tuition together dramatically at the beginning of each academic year. Within 3 years, tuition had gone up by an average of nearly 40%. As it stands now, a university education is more unaffordable than ever before, thanks to Mr. Perry.

Perry’s social views are also disconcerting. He supported a ban on homosexual activity and recently left the open-minded Methodist denomination to ally himself with a preacher notorious for anti-Catholic, anti-Semitic, and anti-Islamic remarks. Calling Hitler’s extermination of Jews “part of God’s divine plan” and Hurricane Katrina “God’s vengeance,” Pastor John Hagee is also known for his consistent warnings of impending apocalypse and eternal flames for the six billion people who reject his idiotic version of Christianity. Hoping to pick up the nutty fundamentalist vote, Perry recently held a rally for evangelical Christians at an unpacked Reliant stadium in Houston. Hagee spoke after Perry. No Catholics were burned at the stake but the preacher did insult Abraham Lincoln by comparing him to Perry.

Born and raised in central Texas, Chris has been an avid fan of history and politics for as long as he can remember. He graduated from Texas State University in 2008 with BAs in History and Anthropology. Afterwards he moved to Spain, where he spent a year in hospitality management and teaching English. He currently resides in Houston, pursuing an MA in History and working as a tutor of Spanish, History, Government, Economics and Reading. Chris is a libertarian by nature.