Air Canada is premiering its brand new international cabin design and seating that the airline will feature on its Boeing 787 Dreamliner fleet. Visit 787.aircanada.com for full details and a virtual tour of the aircraft and new cabin amenities. The airline will take delivery of the first of 37 Boeing 787 aircraft in the spring of 2014. 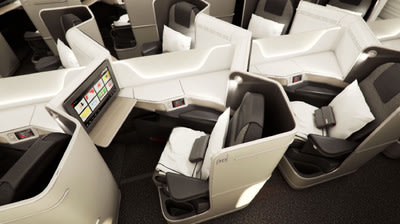 “We are very excited to introduce completely re-designed seating and cabin amenities that will offer Air Canada customers the very best in comfort and contemporary design,” said Ben Smith, Executive Vice President and Chief Commercial Officer. “With the arrival next spring of our first Boeing 787 Dreamliner, Air Canada continues to renew its international widebody fleet with the next generation of modern and fuel efficient aircraft. As North America’s Best Airline, we look forward to taking delivery of our first 787 Dreamliner and continuing to raise the bar in customer comfort.”

Air Canada will provide three cabins of service on board its Boeing 787 Dreamliners highlighted by a brand new contemporary decor and comfortable ergonomic seating that features 180-degree lie-flat seats in its International Business Class cabin. An extensive choice of in-flight entertainment on enhanced definition seat back touch screens will be available for all customers along with power outlets and USB ports.

Beginning in July 2014, the first Air Canada route to be operated with 787 Dreamliner aircraft featuring the new cabin interior and amenities will be the carrier’s Toronto-Tel Aviv route. Seats are now available for booking.

As the first three 787 aircraft are gradually introduced into the Air Canada fleet in the spring of 2014, the airline will offer a preview of its new Dreamliner service on select domestic Canada and transatlantic flights on a temporary basis.

“The introduction of Boeing 787-8 and 787-9 aircraft featuring our new onboard product is a key component of Air Canada’s international expansion plans,” continues Mr. Smith. “The fuel efficient Boeing 787 aircraft will open up opportunities for Air Canada to serve new international destinations, and convert existing routes to Dreamliner service, as we continue to renew our fleet and develop Toronto Pearson into a preferred North American gateway and truly global airline hub.”

With the introduction of the 787 Dreamliner into its widebody fleet, Air Canada is unveiling a contemporary, sophisticated cabin design in a palette of slate grey and neutral tones with accents of Canadian red and celeste blue.

The interior decor, cabin architecture and seating in all three cabins – International Business Class, Premium Economy and Economy – have been designed to provide customers with an exceptional travel experience.

Highlights of Air Canada’s new International Business Class cabin on the 787 Dreamliner include 20 lie-flat Executive Podswith an adjustable pneumatic cushion system that can be extended into a fully flat sleeping position 80 inches in length. New features that enhance the airline’s award-winning International Business cabin include:

Boeing 787 Dreamliner: A New Generation in Comfort and Fuel Efficiency

Boeing is the world’s first major airliner to use composite materials in the construction of its airframe, allowing for significant fuel efficiencies, a more economical long flying range and an enhanced passenger experience with less impact on the environment. Air Canada is the only Canadian carrier to order this new generation aircraft.

The Boeing 787 Dreamliner is 20 per cent more fuel efficient than the Boeing 767 aircraft it will replace.

The Boeing 787 Dreamliner provides passengers with an unparalleled passenger experience:

As Air Canada takes delivery of new widebody aircraft for its mainline fleet, current Boeing 767 and Airbus A319 aircraft will be transferred to its leisure carrier subsidiary, Air Canada rouge.

Air Canada is Canada’s largest domestic and international airline serving more than 175 destinations on five continents.Canada’s flag carrier is among the 20 largest airlines in the world and in 2012 served close to 35 million customers. Air Canada provides scheduled passenger service directly to 60 Canadian cities, 49 destinations in the United States and 67 cities in Europe, the Middle East, Asia, Australia, the Caribbean, Mexico and South America. Air Canada is a founding member of Star Alliance, the world’s most comprehensive air transportation network serving 1,328 destinations in 195 countries. AirCanada is the only international network carrier in North America to receive a Four-Star ranking according to independent U.K. research firm Skytrax that ranked Air Canada in a worldwide survey of more than 18 million airline passengers as Best Airline in North America in 2013 for the fourth consecutive year. For more information, please visit: www.aircanada.com.