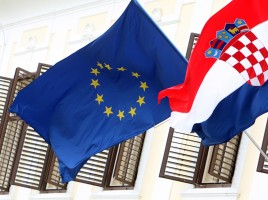 “The EU action is a significant step forward in recognizing the true nature of Hezbollah,” said AJC Executive Director David Harris. “While AJC, like the U.S., Canadian and Dutch governments, considers Hezbollah a single organization, we applaud this decision and the spotlight it shines on Hezbollah terrorist activity. We especially wish to thank the United Kingdom for its leadership, the Netherlands for its consistent stand, and Bulgaria and Cyprus for the courage and principle they demonstrated in the past 12 months in confronting Hezbollah.”

France was an early victim of Hezbollah terrorism, when a suicide bomber killed 58 French peacekeepers in Beirut in 1983. Later, Hezbollah established a presence in several European countries, where it has raised funds and recruited operatives.

The turning point for the EU came a year ago, after Hezbollah bombed a bus in Burgas, Bulgaria. Five Israeli tourists and the Bulgarian bus driver were killed. Shortly afterward, a Hezbollah operative was apprehended in Nicosia, Cyprus. In March, a Cypriot court convicted him of plotting to attack Israelis on the island nation. In addition, Hezbollah has been complicit with the murderous Assad regime in Syria, which the EU felt it could not ignore.

Britain labeled Hezbollah’s “military wing” in 2001. London led the effort to secure unanimity among EU member states for today’s action on Hezbollah. The support of France and Germany were also critically important to the outcome.

Immediately after the Burgas attack, AJC reached out to Bulgarian officials and urged EU member states to take action against the Iranian-sponsored Hezbollah. Since then, AJC engaged in direct, ongoing diplomacy with senior officials of EU member states in their respective capitals, in Brussels, and with embassies and consulates in the U.S. AJC maintains offices in Brussels, Berlin,Paris and Rome.

AJC experts published op-ed articles on the EU and Hezbollah in the Wall Street Journal, El Pais, and major U.S. media, and also have conveyed the urgency of EU action on Hezbollah in AJC’s weekly radio commentaries on the CBS radio network and in numerous media interviews.