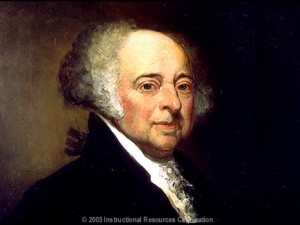 “There are two ways to enslave a country. One is by the sword. The other is by debt.” John Adams. When confronted with the decision to remain in his comfort zone or engage in the trial of a British soldier, Adams defended the British soldier demonstrating that Americans could offer a fair trial to a despised British soldier. In winning this case, Adams propelled Americans into forming the liberty movement branded by ‘don’t tread on me’. The success of this liberty movement was made possible by the sword. Today’s generation is faced with another decision regarding liberty. We have to decide what it will take to gain back our economic liberty and heed the warning of enslavement by debt from Adams. The society that was formed after the Adams’ generation has evolved to become a society of fairy tale dreams funded by debt. Americans are at a crossroads in 2012. Do we destroy our future with debt or do we design our future without debt?

The Adams generation paid with their lives to secure our freedom from the British.  Why is it difficult for us to live within our means and secure our freedom from debt? Our generation of Americans has become so engrossed in ‘living the dream’ that we borrow to pay for private school, college, cars, homes, furniture and even vacations. This debt-driven life has extended from individuals, to families, to states, up to the federal government and it has compromised our liberty. Individuals delay getting married because they can’t afford their ‘dream wedding’, then they delay having children because they can’t ‘afford kids’. Based on the 2010 census, only 48% of the households identified themselves as married. For the first time in the United States, the majority of people are unmarried and one of the top reasons for divorce in the United States is financial problems. Every liberation movement in history began with resolve from individuals. Our resolve as individuals is powerful enough to change the culture of debt at a national level.

Liberty is preserved when we live free from massive personal and national debt. While our liberty comes from God who endows us with inalienable rights, our freedom comes at a price. The liberty movement ‘don’t tread on me’ reminds me of the ‘Mau Mau’ liberty movement in Kenya. When she came to a cross road, my grandmother joined the grassroots liberty movement known as the ‘Mau Mau’. During colonial times Kenyans were not allowed to walk on specific streets because ‘coloreds were barred’. In explaining liberty to me as a teenager, my grandmother explained the cost of liberty as this: ‘our people sacrificed their lives so that you could have the liberty to walk on any side of the street.’ The stories of tragedy and triumph during the ‘Mau Mau’ liberty movement were captured in folk tales. In these folk tales, the preservation of liberty depends on how individuals respond to current events. Subsequently, the only thing owed to an individual by the community is gratitude for making the right choices today in order to ensure a stronger future for the community tomorrow. The financial choices we make today as Americans will either preserve or destroy our liberty.

There is a time for every purpose under heaven so the wisdom of ages states. Whatever the reasons given for accumulating debt, these reasons must no longer be used as excuses for accumulating more debt. Today our liberty is not threatened by British imperialists but by foreign debt owed to people whose future plans don’t adhere to our core American values that reflect individual liberty. America’s future will be defined by how we address the issue of personal and national debt. Instead of financing a dream wedding with debt, we can prepare and plan for the dream marriage by taking a marriage preparation class. We can stop thinking about children as a ‘cost’ and think of them as future assets in our plans to make a better future (i.e., finding a cure for cancer). Facing today’s daunting task of how our generation will shape our future am reminded of the first time I walked into an American grocery store. I was mesmerized by the myriad of choices in the isle. I left the store wondering why anyone needed that many choices of milk, bread or bottled water. Since then I have learned that the American dream of endless choices and comfort needs to be balanced with personal sacrifice and responsibility. John Adams and my grandmother did their part to promote liberty using the sword.  What are we willing to do today using our free markets to promote liberty? In 2012, consider living debt-free or at least not accumulating any new debt and enjoy a healthy and wealthy New Year!