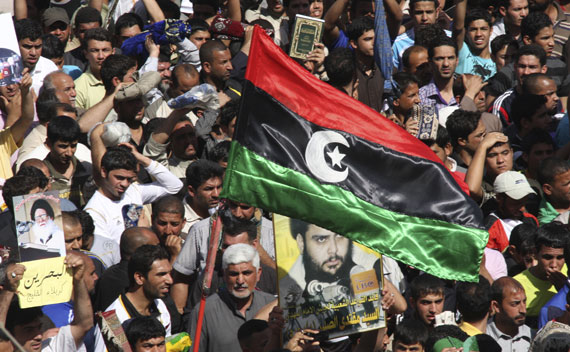 The motto for the "Arab Spring" could become, "one dictator deserves another"

Being a dictator is clearly not as secure of a position as it use to be.  In fact,  Muammar Gadaffi of Libya recently proved that the job of despot is very dangerous.  People ask, “Who cares about these dictators?” I certainly could care less about them, however, I do have an interest in the US maintaining the most positive relationships possible with countries around the world, and I am concerned that the dictators that are leaving are going to be no more or even less humane than those that held the job before.  We are seeing it already with the military junta that took over in Egypt.  The generals that helped bring Mubrarak down are now dragging their feet on elections. Furthermore, they are beginning to apply the same hard line techniques of the regime to crush the protests of those frustrated with the slow pace of change.

The problem this Middle Eastern countries is that they have absolutely no experience when it comes to political freedom. Dictatorship comes very natural to them.  The concern should be of the futility of the changes when it comes to the needs of the people. For the United States, there is the additional concern that those who are taking over are going to be more hostile towards this country than the leaders they replaced.

These countries seem to operate under the premise that they have very few options.  We must have autocratic rule, which is the view of the regimes and those that benefit from them; or there should be mob rule, which in light of the experience of these countries, the result will typically be another dictatorship.  What if there was a third way?

The dictators, when faced with public pressure, have usually responded with cosmetic changes, like changing the Prime Minister of the country (who has very little power anyway).  If that did not work, they would resort to the oppression for which they are all famous.  If the dictators were smart, they would seriously consider another approach.

These regimes should develop popular legislative branches. This branch would be made up of people who are elected by the people in fair elections and are there to represent the nation’s interests.  The dictator (I am sure they hate that expression) would remain the chief executive of the country, but face certain checks and balances.

This type of government has significant merit, especially compared to the autocracies these people live under now and the chaos of mob rule that follows the dictatorships.  I was in Belarus during that country’s last free election, which led to a dictatorship. Hitler’s rise to power was a result of the first free election in Germany’s history. With the context of history, my proposal is actually a moderate proposition rather than the extremes of the king (or unelected “president”) or the angry mob (that will typically fill the void of the chaos they create with a dictator).  Of course, an article such as this is more interesting than practical. Our State Department worships at the altar of unchecked democracy, as do the rioters in the streets of the Middle East (at least among the rank and file). Meanwhile, the dictators are only concerned with their power.  However, the next time you are at a water cooler and the subject of the “Arab Spring” comes up; you can bring a different perspective.