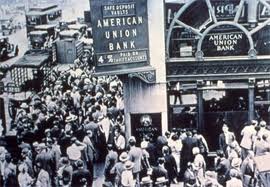 Editor’s Note: Until 2008, bank closures happened, but they were actually quite uncommon — at least since the Great Depression.  With the housing bubble bust in 2008 and the unpredictable policies of the federal government over the last few years, banks falling on hard times — and collapsing entirely — have become surprisingly common as seen in this article from the Wall Street Journal:

U.S. regulators on Friday closed a bank in Florida and Georgia, pushing this year’s tally of bank failures to 67.

The Florida bank—Lydian Private Bank based in Palm Beach—is the fifth-largest failure this year by assets. The Georgia bank, First Southern National Bank, is based in Statesboro.

The Office of the Comptroller of the Currency closed both banks. Sabadell United Bank agreed to take over Lydian, while HeritageBank of the South, a unit of Heritage Financial Group Inc., said it would take over First Southern.

Still, with 67 total failures this year, the pace has slowed. By this point last year, 110 banks were shut by regulators. Florida now has 10 closures, second to Georgia.