Department of Community and Economic Development (DCED) Secretary C. Alan Walker, under the direction of Governor Tom Corbett, today filed a petition with the Commonwealth Court to appoint retired USAF Maj. Gen. William B. Lynch as the receiver for the distressed City of Harrisburg, PA.  Harrisburg is another victim of the worse economy since the Great Depression.

“We remain focused on the ongoing fiscal recovery efforts and the implementation of the court-approved recovery plan to get theCity of Harrisburg back on track,” said Corbett. “Under General Lynch’s leadership, I am confident that this important process will continue moving forward to bring long-term financial stability to the city.” 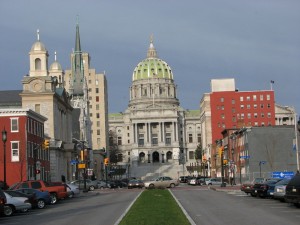 The governor is authorized by the provisions of Act 47, as amended by Senate Bill 1151, to direct the DCED secretary to file a petition in Commonwealth Court to appoint a receiver when the position becomes vacant. Former receiver David Unkovicsubmitted his resignation to the court on March 30.

As the Adjutant General of Pennsylvania under three governors, he led a department with a $550 million budget and 22,000 employees.  Lynch also chaired the Pennsylvania Emergency Management Council after the 9/11 attacks.

He also served as Air Operations Division Director, National Guard Bureau, where he was responsible for the operational tasking of all 91 flying and 244 support units of the Air National Guard in Operations Desert Shield and Desert Storm.

From 2006 to 2007, Gen. Lynch served as chief of staff to the U.S. State Department Office of Iraqi Reconstruction Management in Baghdad (transitioned into the Iraq Transition Assistance Office in 2007). These offices were responsible for facilitatingIraq’s transition to self-sufficiency, and to maintain an effective diplomatic presence in Iraq. The organization also oversaw the distribution of the Iraq Relief and Reconstruction Fund which allocated $18.4 billion and was established by Congress in 2003 to rebuild Iraq’s infrastructure.

He returned to Baghdad again in 2008-2009 as director of the Embassy’s Office of Joint Strategic Plans & Assessment (JSPA), where he reported directly to the ambassador and served as his liaison to the Multi National Force Iraq. The JSPA developed the Joint Campaign Plan that laid out the lines of effort that guided the joint military/civilian activities in Iraq.

A 1964 graduate of Brown University, Lynch received a Juris Doctorate, with high distinction, from Ohio Northern UniversitySchool of Law. He is also a graduate of the National War College in Washington, D.C.

“General Lynch’s experience leading diverse groups to a common solution is critical to success in this position,” said Corbett.  “I have the greatest confidence that the General will get us all back on track and focused on a better future for the people ofHarrisburg.”

The Office of the Receiver will continue to retain the services of McKenna Long & Aldridge LLP, a firm based in Washington D.C.that was selected because of the expertise and experience of its Municipal Recovery & Restructuring group.  The group specializes in the areas of public finance, insolvency, tax, public policy, public-private partnerships, employee benefits and labor, government contracting, government affairs and governance.

The Municipal Financial Recovery Advisory Committee (MFRAC) will continue to meet with the Receiver at least twice a month to discuss the implementation of the recovery plan and the current status of the fiscal recovery process. The four-member advisory committee includes the mayor and city council president of Harrisburg, an appointee of the county commissioners ofDauphin County and an appointee of the governor.

The process to fill the position will follow the same procedure as the original appointment. The Commonwealth Court is required to hold a hearing within 15 days of the filing and will have 60 days from the date the petition was filed to make a determination.

During receivership, the city’s governing body and authorities will continue to carry out the duties of their respective offices as long as no decision or action conflicts with the receiver’s fiscal recovery plan. The receiver may petition the Commonwealth Court to issue a writ of mandamus if the authorities and elected officials of Harrisburg fail to undertake the actions of the recovery plan.