By The Citizens Committee for the Right to Keep and Bear Arms.

Anti-self-defense gun prohibitionists in Washington State have been strangely silent following a text book self-defense shooting in which a homeowner defended himself against a crazed attack, the Citizens Committee for the Right to Keep and Bear Arms said today.

The Friday night shooting in North Bend involved a crazed man who had earlier harassed people at two local gas stations and then apparently tried to break into another residence before he ended up at the house in which an armed resident killed him. The incident happened less than a month after Washington Ceasefire launched a campaign urging people to give up their firearms and “use a knife or baseball bat” to defend their homes. 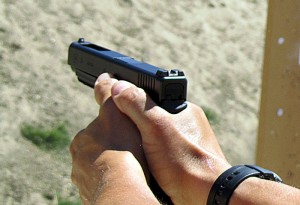 “The case in North Bend underscores the absolute foolishness of homeowner disarmament,” said CCRKBA Chairman Alan Gottlieb. “Based on reports from the Sheriff’s Department, the dead man had smashed his way into the house with a propane tank, and then repeatedly threatened to kill the people inside. The couple locked themselves in their bedroom and called the sheriff’s department. While the homeowner’s girlfriend was on the phone, he armed himself with a pistol and told the suspect that he had a gun, and that the suspect should leave.

“Instead,” he continued, “the man smashed through the bedroom door, and the homeowner fired, killing him. Sheriff’s deputies were at the scene of the first attempted home invasion, proving that police cannot be everywhere at the same time, and that in an emergency, when seconds count, they could be minutes away.”

Ceasefire last month launched a $50,000 billboard advertising campaign on Metro buses that urged people to “think twice about having a gun in your home.”

“After this,” Gottlieb observed, “residents in North Bend won’t have to think twice. While it is regrettable that the homeowner had to fatally shoot the suspect, we are grateful that the homeowner and his girlfriend did not become statistics.

“The silence from Ceasefire is almost deafening,” he concluded. “If the North Bend couple had taken Ceasefire’s advice, they might now be dead. That might satisfy Ceasefire’s habit of exploiting tragedies, but it doesn’t square with responsible people who want to be safe in their own homes.”