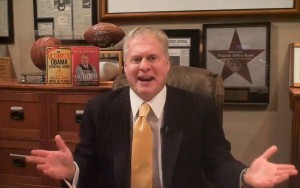 Hi. I’m Wayne Allyn Root for Personal Liberty. Let me read you the definition of “fraud” straight from the dictionary:

Fraud: Act or course of deception, an intentional concealment, omission, or perversion of truth… Willful fraud is a criminal offense which calls for severe penalties, and its prosecution and punishment (like that of a murder) is not bound by the statute of limitations.

Now let’s take a look at how Obamacare was sold. Almost one year ago, I asked right here at Personal Liberty: “Is President Obama Too Big to Jail?”

I was referring primarily to the crime of fraud and misrepresentation used by Obama and his socialist cabal to sell Obamacare.

Right here at Personal Liberty months ago, I compared the fraud and deception used by Obama to sell Obamacare to the fraud committed by TV infomercial scam-artist Kevin Trudeau. I suggested Obama committed the crime of consumer fraud.

Trudeau was convicted earlier this year for using lies and misrepresentation to sell his products on television. The U.S. government rightfully claimed Trudeau couldn’t have sold his product (a book about weight loss) without lying to consumers. The government claimed without Trudeau’s lies, deception and misrepresentation, no one would have bought his book. He was sentenced to 10 years in prison. I said at the time this was exactly how Obamacare was sold.

Lo and behold, we now have proof that Obamacare was sold by Obama and his socialist cabal with the same kind of lies, fraud and misrepresentation used by Trudeau. The words of none other than Jonathan Gruber, the MIT professor and architect of Obamacare, have come back to haunt the Obama administration (clear as a bell on video).

I’m no lawyer (although I play one on TV), but it’s clear the selling of Obamacare was built on fraud. Gruber admits (actually brags) that Obamacare could never have passed if the American people knew what was in it.

Gruber brags that the bill was saved by a “lack of transparency.” Isn’t that a nice way of saying lying?

He calls American voters “stupid.” Isn’t that what con men like Trudeau and Bernie Madoff think of their victims?

Gruber doesn’t mention the biggest whopper of all: “If you like your insurance you can keep it.” Obama told this lie while his own internal White House reports showed that up to 93 million Americans would lose their insurance because of Obamacare. Yet Obama kept repeating that famous line to the media and at speeches and rallies across the country. Isn’t that the very definition of fraud? Obama lied to sell Obamacare to “stupid American voters.”

How does that differ from Madoff taking money from “gullible investors” by telling them he could produce massive returns year after year? How does that differ from Trudeau telling “gullible” TV viewers that he had a system that made weight loss easy? All these crooks and scam artists have one thing in common: They needed to lie and misrepresent to get victims (they would describe as “stupid”) to buy into their Ponzi schemes.

What any U.S. prosecutor could tell you is the architect of the crime (Gruber) just confessed to the crime on video. This is an ironclad case of fraud. Now use his words to take down the entire criminal enterprise.

Or “If you like your doctor, too bad. You’re going to need to find another.” Or “If you like your price for health insurance, too bad. Because your price is going to double or triple.” If Obama had truthfully admitted any of that, he never could have sold Obamacare to the American public. So he had to lie, deceive and misrepresent. That’s the definition of fraud. That’s exactly why Trudeau and Madoff are in prison.

But the selling of Obamacare was far more serious than typical consumer fraud. Madoff is in prison for life. Trudeau is away for 10 years. But neither put a gun to the head of their victims. They simply advertised or promoted. Victims willingly came to them or bought from them of their own free will. Yet that’s still (of course) fraud because victims willingly handed over their money based on lies and deception.

But Obama didn’t just lie and misrepresent. Obama sold his scam at gunpoint. No one had “free will.” Obama forced every American with the force of government and IRS fines to buy his fraudulent product. That’s more like a violent crime. That’s armed robbery. That’s a much more serious crime.

It’s time to put the architects and salesmen of Obamacare in prison. Trudeau cost about 1 million consumers a paltry $30 each. No one’s life was ruined. Madoff cost a few thousand wealthy investors a few billion dollars. Some lives were ruined, but the numbers are small.

But Obama is in a league all his own. Obamacare is the biggest fraud in world history. Over time, it could cost American consumers trillions of dollars in new taxes, higher premiums, deductibles, co-pays or, in the case of victims who are terminally ill and lose their insurance altogether, million-dollar bills. For a few victims who have terminal cancer, the stress of losing their insurance coverage or doctor may cost them their lives.

And how about the job losses and downgrades from full-time to part-time work for millions of American employees? Trudeau and Madoff damaged a few personal economies. Obama’s fraud damaged the entire U.S. economy. What kind of prison sentence do you get for that?

Now remember the second half of the definition of fraud straight from the dictionary:

Willful fraud is a criminal offense which calls for severe penalties, and its prosecution and punishment (like that of a murder) is not bound by the statute of limitations.

The words on video of Gruber prove this was “willful” fraud. He basically says: “We had to lie to the people, or these stupid voters would never have passed it. And we passed it, so wasn’t that worth it?” That’s willful fraud. It doesn’t get any more willful than that. It’s more proof — on video — that Obama and his socialist cabal believe “the ends justify the means.” Meaning any crime or fraud is OK as long as we achieve our goal of income redistribution and the destruction of capitalism. If this isn’t punished with prison terms, what crime will they commit next? How far will they go?

Republicans just won a massive, historic landslide victory. It was based on middle-class Americans’ disgust and rage at the lies, cancellations and unaffordable premium increases of Obamacare. Now it’s time for a Republican Senate and House to start criminal investigations.

Now it’s time to make the people who committed fraud to sell Obamacare pay. I think life in prison is getting off easy for the pain and loss they’ve caused to more than 300 million American victims — and for committing the first trillion-dollar fraud in world history.