Editor’s Note: First there was the concern over the Jewish vote in light of complaints from that community and their disdain for the Obama Administration’s Middle East policies; now there is concern that another group that favors the Democrats — women — are beginning to look for political answers elsewhere.  Women are growing with enormous political and economic influence.  Historically, the Democratic Party seemed like a smart place for women with its emphasis on equal rights and its war on corporate “glass ceilings.”  The growth in the number of women in corner offices and in entrepreneurship has allowed them to see, first hand, the impact liberal policies are having on the economy in general and in their businesses in particular. Furthermore, the rise of powerful conservative women, like Michele Bachmann and Sarah Palin, has made females take a second look at the GOP. This article, found in the Daily Caller, explains what is going on with women and the left: 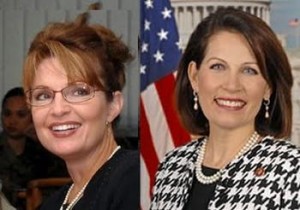 Is the rise in influential GOP women harming the Democrats?

There are many devastating revelations in Confidence Men: Wall Street, Washington and the Education of a President, Ron Suskind’s new book on the inner workings of the Obama administration, but perhaps the most damaging is the insinuation that President Obama and the men on his staff are sexists.

Former White House communications director Anita Dunn is quoted as saying the Obama White House “actually fit all of the classic legal requirements for a genuinely hostile workplace to women.” Former head of the Council of Economic Advisers Christina Romer even said she “felt like a piece of meat.”

An anonymous current female official directly placed the blame on Obama: “The president has a real woman problem. The idea of the boys’ club being just Larry [Summers] and Rahm [Emanuel] isn’t really fair. [Obama] was just as responsible himself.”

These accounts portray President Obama as a man who, at best, allows his male staffers to create a hostile work environment for his female staffers and, at worst, participates in it himself.

Since the Democratic Party claims to be “for women,” this is rank hypocrisy. Unfortunately, this attitude is entirely consistent with the left’s despicable misogynistic treatment of conservative female leaders like Sarah Palin and Michele Bachmann.

Since the day she came on the national stage, Sarah Palin has been attacked in sexually degrading ways — most recently in Joe McGinniss’s disgusting tabloid trash. Michele Bachmann, too, has faced…(read more).