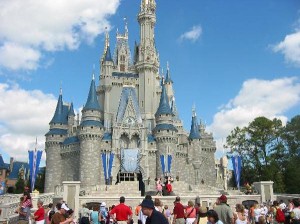 My family and I just spent a week at Disney World.  My husband had been several times but this would be mine and our children’s first time.  It was really fun.  I enjoyed the experience all around.  Even standing in line you were surrounded by an atmosphere of the ride you were about to take.  It helped to keep you entertained while standing in line.

But I have to say the most impressive thing out of all of the parks was Hollywood Studios “One man’s dream”.  It was a biography of Walt Disney.

It really got me thinking.  Walt had a dream of being an artist, so he set out to make his dream a reality.  Several times he was almost bankrupt with little money to his name risking everything to make his dream come true.  This is not a man who asked for a handout.  Who gave up when his dream lost him money.  No, he picked himself up and worked even harder. And not only did he have a dream of being an artist, which he achieved to great acclaim.  But he wanted to open up a park where families could go together and all members would enjoy the experience.  Again, he had to start from scratch with financial obstacles in his way.

That, I think, is the big difference to how some think these days.  People don’t want to risk anything.  They want a job to fall in their laps, they don’t want to have to do a job they don’t like or even two to reach a goal, if they even have one.

What happened to a work ethic that included getting to work on time, working your hardest and doing a good job.  When I worked in an office I was usually at work 15-30 minutes early, I usually worked through lunch and if I had completed a project asked if there was anything else I could do.  I had younger co-workers who would come in late, take their full lunch, take every smoke break possible and start getting ready to leave for the day at least 5 minutes before 5:00.

Watching the “Occupy Wall Street” group and listening to them explain their position, only confirms my concerns about how the younger generations are losing the battle of responsibility.  Instead of taking responsibility for the choices they make they put the blame on others.  It is just plain jealousy.  They want what someone else has and declare “how dare they have it“.

This is how I see it.  I made some poor choices during my college days.  I didn’t really work that hard.  I wanted the easiest degree I could get.  I just wanted to work.  So I got an associate degree.  I took the first job I was offered starting out as a receptionist.  I at one time had a dream of being an attorney, I also wanted to be a singer and an actress but here is the thing…I never did anything about it.  I once auditioned for a chance to be on a television show singing but once I got the invitation I got scared (plus some personal issues at the time) so I chose not to go so I will always wonder.  Now I started out as receptionist in that company and I did end up being an office manager at one of our offices.  I did end up going that far because I think I was a hard worker and dependable.  But that is as high and as far as I could go without a degree in business.

Now look at my  husband.  He had a desire since middle school to be a pharmacist.  Pharmacy technicians can surely relate to this dream. So what did he do?  He got a job sweeping floors in a pharmacy and began watching and learning.  He ended up not getting in to pharmacy school his first try so instead of giving up he decided to get another degree.  He ended up getting a Master’s degree as a medical technician and finally got his Doctorate as a pharmacist.  My husband had a dream and went for it.  He didn’t give up but kept trying until he made it.  His biggest dream is to own his own “old time pharmacy” with soda fountain and all. One day…

When I compare myself and my husband I don’t begrudge him the salary he makes compared to mine.  He worked harder and never gave up.  He deserves what he makes.

Before you begrudge someone the things they have,  you might think what they have done to get it.  Take a look at yourself and wonder if you have worked as hard as you can, do you have a dream/goal and have you really tried to achieve it?

You know one of the most dangerous emotions is jealousy and if you are looking at what someone else has and are angry with them because of it…you are jealous/envious.

Find a dream and go for it, it is never too late and you are never too old.  But always remember, wherever you are is because of decisions you have made.  You are only in control of you and no one else controls your fate unless you let them.

April Dye is a wife and mother of two. She loves to read, watch movies and television, study the Bible, hang out with family and her job. You can follow her on face book at facebook.com/AprilVestalDye and clardye.blogspot.com.
All opinions expressed on USDR are those of the author and not necessarily those of US Daily Review.