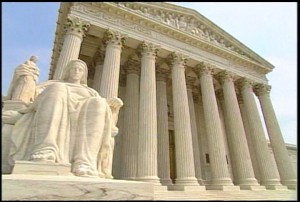 According to the Federation for American Immigration Reform (FAIR), this week’s oral arguments before the Supreme Court on Arizona’s immigration enforcement law, SB 1070, established compelling legal arguments in support of the state and local governments’ authority to enforce federal immigration laws. Attorneys representing the State of Arizona effectively refuted the preemption argument that served as the basis of the U.S. Department of Justice’s (DOJ) lawsuit.

Arizona is seeking to overturn a 2011 Ninth Circuit Court of Appeals decision blocking key provisions of SB 1070 from taking effect. The ruling was made in spite of the fact that Arizona’s law mirrors federal immigration statutes enacted by Congress. In asking the Supreme Court to reverse that ruling, attorneys for Arizona presented compelling legal reasons why the Supreme Court should reverse the Ninth Circuit’s decision. Among the key points brought out in today’s oral arguments were:

“Nothing in SB 1070 conflicts with or goes beyond the parameters of laws enacted by Congress and there is nothing in those federal statutes that indicates that Congress intended to preempt states from assisting in the enforcement of U.S. immigration laws,” noted Dan Stein, president of FAIR. “States regularly assist in the enforcement of all sorts of federal laws—immigration should be no different.”

“It has been clear from the outset that the administration’s lawsuit against Arizona was about  achieving political gain by ensuring that no one enforces U.S. immigration laws. As attorneys for Arizona ably pointed out before the Supreme Court today, not only are state efforts to enforce U.S. immigration law not preempted, but Congress has expressly welcomed the assistance of state and local governments in enforcement,” said Stein.

FAIR expressed optimism that the Supreme Court will uphold SB 1070 when it renders its ruling in June. “It is state and local governments that are bearing the brunt of the Obama administration’s non-enforcement policy. We fully expect that if the Court upholds all or most the provisions of SB 1070, numerous other states will enact similar laws, creating the sort of meaningful deterrent to illegal immigration that Congress intended and the American public overwhelmingly wants,” concluded Stein.

According to an organization statement, “Founded in 1979, FAIR is the country’s largest immigration reform group.  With over 250,000 members nationwide, FAIR fights for immigration policies that serve national interests, not special interests.  FAIR believes that immigration reform must enhance national security, improve the economy, protect jobs, preserve our environment, and establish a rule of law that is recognized and enforced.”