This from the Boston Globe: 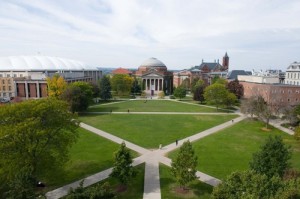 The school placed Fine on administrative leave Thursday night ‘‘in light of the new allegations’’ and an investigation by the Syracuse City Police.

ESPN said the accusations were made by two former ball boys.

‘‘We are aware that many wonder if university administrations are willing to turn a blind eye to wrongdoing that may disrupt a successful sports program,’’ Cantor said in an email Friday morning to students, faculty and staff. ‘‘I can assure you I am not, and my fellow administrators are not.

‘‘We hold everyone in our community to high standards and we don’t tolerate illegal, abusive or unethical behavior — no matter who you are.’’

Bobby Davis, now 39, told ESPN that Fine allegedly molested him “hundreds of times” beginning in 1984 and that the sexual contact continued until he was around 27. A ball boy for six years, Davis told ESPN the alleged abuse occurred at Fine’s home, at Syracuse basketball facilities and on team road trips, including the 1987 Final Four.

Davis’ stepbrother, Mike Lang, 45, who also was a ball boy, told ESPN that Fine molested him starting while he was in fifth or sixth grade.

Fine is in his 35th season as a Syracuse assistant.

‘‘He has vehemently denied the allegations and should be accorded a fair opportunity to defend himself against these accusations,’’ Cantor said in the email.

Orange coach Jim Boeheim released a statement saying: ‘‘This matter was fully investigated by the university in 2005 and it was determined that the allegations were unfounded.

‘‘I have known Bernie Fine for more than 40 years. I have never seen or witnessed anything to suggest that he would (have)…(read more)