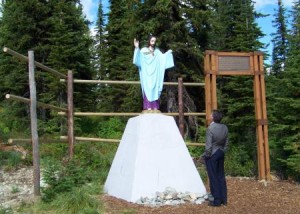 The American Center for Law and Justice (ACLJ), focusing on constitutional law, said today it will “aggressively defend” a World War II memorial on a Montana mountain – a statue of Jesus – from a lawsuit filed by an atheist organization. The ACLJ said today it plans to file a friend-of-the-court brief backing the memorial.

“It’s clear this legal challenge represents the latest move in a troubling pattern designed to remove any religious reference from our history – a tactic that we believe ultimately will fail in the federal court system,” said Jay Sekulow, Chief Counsel of the ACLJ. “We are planning to file an amicus brief in this case – standing up for the constitutionality of this important memorial. We will be representing thousands of Americans who understand that this statue represents the history and heritage of the region, not a government endorsement of religion.”

Just last month, the National Forest Service rejected arguments made by the Freedom From Religion Foundation (FFRF) to remove the statue. The federal government agreed to keep the statue in place, renew the special use permit for ten years, and acknowledged that this statue represents an important part of the history and heritage of the region. That decision has now prompted FFRF to file a federal lawsuit challenging the decision.

The ACLJ provided a majority of the public comments received by the federal government with a letter representing more than 70,000 concerned individuals urging the Forest Service to renew the lease.

“The statue’s history and purpose, its longevity, and its setting all support the conclusion that no reasonable observer could think that renewing the Knights of Columbus’ special use permit would be an unconstitutional endorsement of religion,” the letter contended.

The statue of Jesus was put in place on Big Mountain at the Whitefish Mountain Resort in Montana in the 1950s by WW II veterans who were also members of the Knights of Columbus. The veterans were inspired by monuments they saw in the mountains of Europe during the war. The statue of Jesus, they said, was put in place to commemorate the service of local WW II veterans – a war memorial.

Led by Chief Counsel Jay Sekulow, the American Center for Law and Justice is based in Washington, D.C. and is online atwww.aclj.org.