Australia set a new world record on June 30, 2012 of 21 years of continued economic growth – an achievement unmatched by any other developed country in recent times. While the global economic crisis endured, Australia’s trade with Asia, mining industry, and business supportive government drove positive growth for the country in 2012.

Each of the first three quarters of the 2011/2012 Australian financial year reported positive economic growth of 1.0 percent, 1.0 percent and 0.9 percent respectively according to the Australian Bureau of Statistics. Exact growth for the fourth quarter will be reported by September, but it is forecasted by HSBC to continue the positive growth pattern. 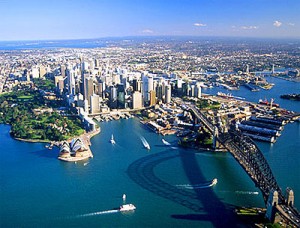 “The Australian economy has proven itself to be dynamic and robust over the past 20 years,” said PricewaterhouseCoopers Economics and Policy leader Jeremy Thorpe. “Australia’s economic strength is envied across the world. Thanks to a resilient natural resources sector, the Australian economy is well positioned for future growth.”

While natural resources attracted investors to Australia from around the world, specific regions have benefited from a focus on high-tech sectors and reinvestment in local economies. Despite making up just 3 percent of Australia’s land mass, the state of Victoria – where the city of Melbourne is located – is responsible for almost a quarter (24 percent) of Australia’s economy and has AAA credit ratings from Standard and Poor’s and Moody’s. Victoria’s economy is larger than that of Singapore or Hong Kong.

A combination of household consumption, private business investment and Victoria’s exports has driven growth. Despite the high Australian dollar, Victorian goods exports grew by 4.6 percent in the last quarter and more than nine per cent over the year.

The most recent release of Australia’s National Accounts showed that final demand within the state of Victoria had increased by 1.8 percent over the March quarter and 2.7 percent over the year. Victoria’s growth over the last quarter was the strongest of all states with exception of Western Australia which is the beneficiary of the mining boom.

Melbourne is the center of the $1.4 trillion Australian pension industry as well as headquarters of the country’s leading sovereign wealth funds and half of Australia’s leading banks. It is one of the world’s foremost biotechnology hubs and home to more research universities than any other city of its size. Its expertise in information communications technology has drawn major investment from Microsoft, IBM and Computershare, and the network operations center for the ambitious National Broadband Network. Studies show that companies conducting R&D in Melbourne bear 88 percent less tax burden than in the United States.

“Victoria has always hosted a diverse and smart economy,” said Michael Kapel, Commissioner to the Americas for the Government of Victoria, Australia. “The government of Victoria continues to offer innovative ways to encourage growth, including recent incentives such as the R&D tax credit, which makes Melbourne one of the most attractive locations in the world for R&D. We are inviting US companies to follow the likes of Microsoft and IBM to come to Melbourne and be part of one of the world’s most reliable and dynamic economies.”