It is being reported by several sources that Barack Obama has awarded the Medal of Freedom, the highest civilian honor in the United States, to a Socialist.

According to the Washington Times:

“President Obama awarded the Presidential Medal of Freedom on Tuesday to Dolores Huerta, an 82-year-old labor activist and co-founder of the United Farm Workers union.

“Huerta is also an honorary chair of the Democratic Socialists of America.

“DSA describes itself as ‘the largest socialist organization in the United States, and the principal U.S. affiliate of the Socialist International.’

The Voice of America reports that she was one of thirteen recipients this year:

U.S. President Barack Obama has awarded the country’s highest civilian honor to a music legend, a pioneer astronaut, and the first female U.S. secretary of state.

They were among 13 recipients Tuesday of the Presidential Medal of Freedom according to the Voice of America: 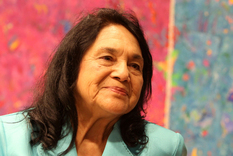 At a White House ceremony, Mr. Obama said the winners had an incredible impact on so many people. He said their actions inspired people, enriched their lives, and changed their lives for the better.

The recipients included musician Bob Dylan, who Mr. Obama called a giant in American music history; John Glenn, the first U.S. astronaut to orbit the Earth and who Mr. Obama says is a hero in every sense of the word; and former Secretary of State Madeleine Albright. President Obama said her consummate diplomacy and democratic ideals advanced peace around the world.

Three of the medal winners were honored posthumously. Jan Karski, was part of the Polish underground resistance movement during World War II. He reported to Allied nations some of the first eyewitness accounts of the Holocaust. He died in 2000.

Japanese-American Gordon Hirabayashi, who died earlier this year, was a college activist against the forced relocation and internment of Japanese Americans during World War II.

And Juliette Gordon Low founded the Girl Scouts. She died in 1927.

Another honoree, Israeli President Shimon Peres will receive his medal when he joins President Obama for dinner at he White House next month.