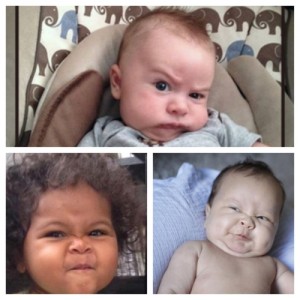 The Search for America’s Best Stinky Face was launched to celebrate the award-winning Arm & Hammer™ Diaper Pail by Munchkin, which has been proven #1 in odor-control in laboratory tests.  The Arm & Hammer Diaper Pail is helping to rid America of ‘stinky faces’ forever by eliminating unpleasant nursery odors – one household at a time. As the winner, Keilbart will receive a $1,000 cash prize and an Arm & Hammer Diaper Pail. In addition, Daniel Parsons, from Olathe, Kan. and Claire Williams, from Baltimore, Md., were named as runners-up, and will be awarded an ultimate gift basket by Munchkin.

“A baby’s face says it all, and any parent knows there is nothing more honest or transparent than a child’s expression,” said guest judge and expression specialist Janine Driver. “In a day where memes and silly photos can instantly become viral sensations, Munchkin’s Search for America’s Best Stinky Face captured the fun and honest moments that parents witness with their children through powerful yet simple expressions. Keilbart’s silly gesture can be interpreted as a curious grin or an overly-exaggerated ‘stinky face’ in need of an Arm & Hammer Diaper Pail to clear the air.”

The Search for America’s Best Stinky Face kicked off in May with a call for entries on the Munchkin Facebook page. Parents were prompted to share photos or videos of their child’s best ‘stinky face’ to showcase why they need the odor-fighting Arm & Hammer Diaper Pail. Following a submission period, Munchkin collaborated with its four guest judges to determine the top five contenders—and ultimately—the grand prize winner and runners-up who will each receive a diaper pail.

“This fun campaign was inspired by our desire to share the news that our diaper pail was proven #1 in odor-control. We were able to take that message and use it to create a platform for moms and dads to share, laugh and relate to one another’s photos,” said Jeff Kaltrieder, vice president of marketing at Munchkin. “We are proud to have received more than 400 entries in the Search for America’s Best Stinky Face, and are delighted to name Keilbart the grand prize winner for his captivating little ‘stinky face’.”

To commemorate “America’s Best Stinky Face,” Munchkin is giving away 10 Arm & Hammer Diaper Pails on its Facebook page, continuing the effort to help rid the world of ‘stinky faces’ with a patented diaper disposal system that uses the power of Arm & Hammer® baking soda at its core.