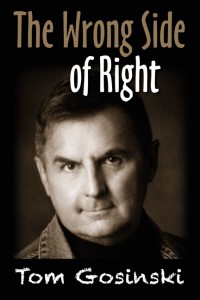 Tom Gosinski, former Director of Government and International Affairs at the American Voluntary Medical Team asks on his website, “What would you do if you were unwittingly involved in illegal drug activity by your boss, a U.S. Senator’s wife? Would you be silent? Or would you seek a legal remedy?” He tells the story of what he chose to do in his new book released on the alleged Cindy McCain drug addiction activities entitled, “The Wrong Side of Right.”

Gosinski’s new book, released on Amazon, is his behind the scenes account of what allegedly transpired before, during and after the time he accused his boss at the American Voluntary Medical Team, founder Cindy McCain, wife of the U.S. Senator John McCain, of illegal drug activity in 1992. McCain’s struggles with drugs is further substantiated by an article in the Washington post posted on September 12th, 2008. In the book, Gosinski claims he and some of his colleagues at the non-profit organization became convinced that Mrs. McCain was addicted to the prescription narcotics Percocet and Vicodin and believed she illegally used the names of her employees and the charity to obtain the drugs for herself.

In telling his story, Gosinski claims it was his accusations that led him to be wrongfully fired from the charity in January of 1993. Shortly thereafter , Gosinski found himself under fire as a federal investigation, a civil lawsuit, an extortion investigation and a barrage of media attention ensued.

Gosinski will discuss his book “The Wrong Side of Right,” with attendees at a private book signing event in September near his home in Nebraska. The author is planning additional signing engagements in Omaha, Denver, Phoenix, New York City, and Washington D.C. and will post updates on future book signings at his site: http://www.gosinski.com.

Tom Gosinski grew up in Nebraska and graduated Concordia College in Moorhead, Minnesota. After college he moved to Phoenix, Arizona and held a variety of positions at America West Airlines including Technical Writer, Policies and Procedures, Manager Customer Services Administration, and Manager Government & International Affairs. He left America West Airlines and served as Director, Government & International Affairs at the American Voluntary Medical Team. Since then, Mr. Gosinski has worked in interior design and project management. He has volunteered, served on several boards, and advised a variety of nonprofit organizations.