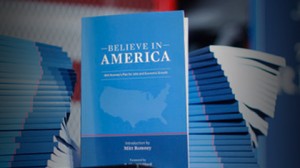 I don’t believe we’ve ever seen a candidate for United States president publish the basis of his economic plan for all to read before. And yet, this is precisely what Mitt Romney has done. He then, very wisely, made it available in electronic format, both on his website and on Kindle … and to top it all off, it’s free.

That’s the right price for me, so I immediately downloaded it onto my laptop and Galaxy Tab and started reading. I was not only pleasantly surprised by the thoroughness of the contents, it set a new standard for me in presidential candidates. Let me explain.

When someone, Mitt Romney in this instance, puts a plan down on paper, we can then hold them to it, every aspect of it. That takes a certain kind of conviction and ability to stand behind what you say.  I’d like to see the rest of the candidates do the same. I’d like their plans for the U.S. economy down on paper, published, and made available, for free, to the American people. Then we can vote on facts rather than just debates, websites, and news articles. Of course, you’ll be held accountable, but isn’t that the point of the current political climate. Taking responsibility.

Now back to Mitt Romney’s Believe in America. He laid out the problems facing America right now, and their effects are legion on the American economy and people.

I have to agree with him. These are the critical issues facing America today. Well, that and the direct violation, and immense overreach, of the U.S. Constitution on every level by the U.S. Congress and the President. But other than that, these are the key issues. But back to Mitt Romney.

Romney brought economic experts, policy experts, used his own experience and skills, and wrote it all down, and he did a very good job. He drilled down on all these issues, outlined the current policies and problems in these areas, and then proceeded to continue laying out precisely what he would do if he were elected President of the United States of America. And the plan is given to the reader in day by day steps.

This takes an immense amount of belief in one’s stance on the issues. Whether you support Mitt Romney or not, I am going to encourage you to read Believe in America because I came away with a clear, concise understanding of the fiscal situation we are now facing, as well as a solid plan to put America back on the proper fiscal path. It is written in understandable language and is not in a complicated fashion. It was written, I believe, to put forth Romney’s plans for America so it could be understood by everyone willing to read it. It is short, concise and worth the read.