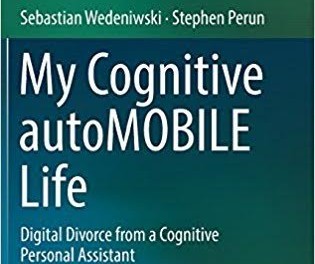 A recent auto show report described the latest concept cars: fully autonomous off-road capabilities, cognitive intelligence that scans human emotions, 5G access, and swiveling front seats, movies en route. What’s missing: obvious gas and brake pedals or internal combustion engines. Many of these cars drive themselves and charge on electricity. But that’s nothing, really. According to AI and automotive industry mavens Sebastian Wedeniwski and Stephen Perun, tomorrow’s cars will be capable of a whole lot more. With years in the cognitive machine trenches, they’ve written a gripping book, My Cognitive autoMOBILE Life: Digital Divorce from a Cognitive Personal Assistant (Springer, 2018). It explains how we got here and where we’re going — a lot faster than most of us  think.

The book’s message is clear: You can’t stop the forward momentum of technological advancement, and it’s no use trying. We’re on a no-brakes road to cars that sense our feelings and meld with our mindsets. They will create an ideal interior space for us as they whisk us through our day, and will be able to interact with us, communicate with other cars and platforms, and drive. It may feel like living inside your own expanded brain, complete with white leather upholstery and Internet access. What it won’t feel like: old-fashioned horsepower, the lure of driving fast, or that nostalgic connection with a certain  brand.

Our emotional attachment to cars is not only outdated, the authors say, it doesn’t fit the rest of our lives. We’re 24/7 digitally connected social sharing data-consuming and creating beings, and we could use a little extra time in our lives. Self-driving cars will save us feel from having to focus on a long drive instead of do something more productive. Our car is going to function like a robot assistant, just moving us through time and space as it assists  us.

There’s a lot of technical information in the book, and a heap of interesting graphs with terms you may not recognize: natural language processing, predictive analytics, API (application programming interface), dependency parse tree, non-linear dialogue. But don’t let that stop you: this book is fun to read, and the authors know how to clarify details and concepts in a way to make us feel smarter. Which, actually, is no mean feat: one of the biggest problems with the way we regard the cars in the future is that we simply can’t get the old version out of our heads. And that’s not really a car issue, it’s a mechanical issue. There’s a hilarious video circulating in which an Italian grandmother tries to have a simple conversation with Alexa that could stand as a metaphor for how stuck we are. And the cars in the future will have the kind of cognitive smarts to understand  that.

Another neat facet of this book is that it’s directed at both sides of the equation: the automotive industry as well as consumers.  For however much we may hate Uber or Amazon, they have broken the mold and set us on a course into the future, write the authors, and their market dominance is partially because they were able to set aside the norms for something altogether new. There are names you won’t recognize in terms of new transportation and computer application companies — such as Car2go, and those you will, such as IBM. But what you will recognize in this book is the incredible potential of the human imagination to create something, well, incredible. So long as we can keep our hands on the wheel as far as making human-centric policy and legal decisions, we should be fine. So sit back and enjoy the  ride.

Read about authors and their new book here:  think-automobility.org