By Candace Salima, Contributor to US Daily Review. 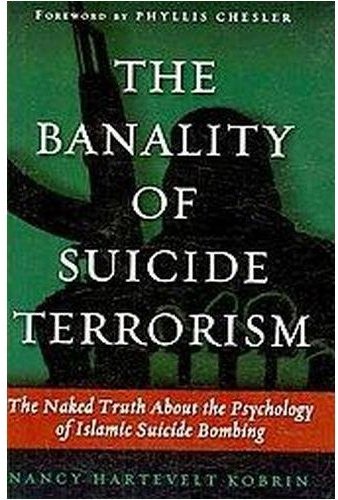 Book: The Banality of Suicide Terrorism

When I sat down to read this book, I was decidedly unsure of what I would be getting into, but since I was interviewing Dr. Kobrin the next day, I wanted to have a full list of questions and comments ready to go.

Dr. Nancy Kobrin is a psychoanalyst with a Ph.D. in romance and semitic languages, specializing in Aljamía and Old Spanish in Arabic script. She is an expert on the Minnesota Somali diaspora and a graduate of the Human Terrain System program at Leavenworth Kansas. And yes, I had my dictionary pulled up and used it often as I read the book, and I’m a well-read, educated woman.

I had quite the visceral reaction to Dr. Kobrin’s approach to suicide terrorism. I forced myself to keep reading, as horrifying as I found the entire subject and her theories on the matter, until I finished the book. I made myself take a good hard look at my response to the information, and realized because I am an American, and a westerner to boot, there was simply no way I would ever understand, let alone accept, the motivation behind suicide terrorism.

With that being said, I believe this is a book every single person in the western world should read. Dr. Kobrin looks at the treatment of women in the Arabic world, the treatment of children, boys vs. girls, and how they are brought up within the interpretations of the teachings of Islam. She compares, and quite well, suicide terrorism to domestic violence, and draws the parallels across the board.

As she outlined how children are raised, the self-hatred Arabic women have, because they are devalued and abused from birth, and the children’s reaction to this abuse before their very eyes, it is easy to see how the added element of a genetic disposition toward violence, would easily grow to serial killer status and the perfect patsy for jihadists and Al Qaeda. Add, what I already know about unattachment disorder and I can easily understand how this is the perfect breeding ground for terrorists and suicide bombers in all forms.

She writes of the “Early Mother” and the mother/child relationship between the terrorist, suicide bomber, and his/her mother. And, this is where I run into a little trouble. But she outlines it well, and explains her hypothesis well. So well, in fact, that the U.S. Army uses this book to help its soldiers understand the psychology of suicide bombers and terrorists.

So although I was highly disturbed by what I read, I’m glad I read it and understand better what goes on in the families and culture which produce this type of individual. With that being said, I have no sympathy for terrorists or suicide bombers, nor will I ever, regardless of their upbringing.

It is stated that 1% of the almost 1.5 billion Muslims worldwide are terrorists. That’s 15,000,000 terrorists running around, in case you were wondering. But that leaves the rest of them who DON’T become terrorists. Read The Banality of Suicide Terrorism to understand how those 15,000,000 think.

The Banality of Suicide Terrorism could have used the benefit of a top notch editor, and the flow of information better organized, but it is packed with good information and leaves the reader with a greater understanding of what we are facing with suicide bombers and terrorists in the world today.