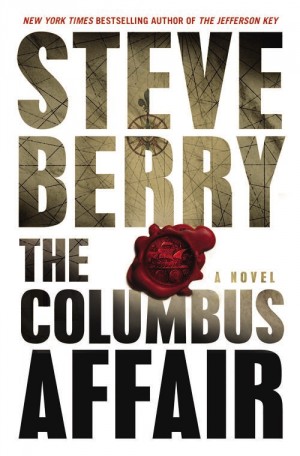 Just who was Columbus? Do we really know? There is startling little information from the man himself, which is why he has become such a great mystery. Celebrated here in America as the discoverer of our nation, he is apparently not so popular in other nations. And this is where New York Times bestselling author, Steve Berry, picks up the story.

I feel like I need to own up to the fact that Steve Berry is one of my favorite authors. But each book, no matter who the author, must stand on its own merits, and The Columbus Affair does just that very thing.

Pulitzer Prize–winning investigative journalist Tom Sagan has written hard-hitting articles from hot spots around the world. But when a controversial report from a war-torn region is exposed as a fraud, his professional reputation crashes and burns. Now he lives in virtual exile—haunted by bad decisions and the shocking truth he can never prove: that his downfall was a deliberate act of sabotage by an unknown enemy. But before Sagan can end his torment with the squeeze of a trigger, fate intervenes in the form of an enigmatic stranger with a request that cannot be ignored.

Zachariah Simon has the look of a scholar, the soul of a scoundrel, and the zeal of a fanatic. He also has Tom Sagan’s estranged daughter at his mercy. Simon desperately wants something only Sagan can supply: the key to a 500-year-old mystery, a treasure with explosive political significance in the modern world. For both Simon and Sagan the stakes are high, the goal intensely personal, the consequences of opposing either man potentially catastrophic. On a perilous quest from Florida to Vienna to Prague and finally to the mountains of Jamaica, the two men square off in a dangerous game. Along the way, both of their lives will be altered—and everything we know about Christopher Columbus will change.

Filled with history, Berry skillfully weaves fiction through fact, ancient times through modern, and gives us a story filled with intrigue, betrayal, and discovery as we race through Europe, Eastern Europe and Jamaica. It is a page turner, an although I was working nearly 20 hours a day, I ended each evening with a few chapters until exhaustion caught up with me.

It’s another bestseller for Steve Berry, no question at all. So I recommend this book be added to your home library, right next to the rest of your Steve Berrys, James Rollins, Nora Roberts, Chris Stewart, and so many other great authors.

Steve Berry is the New York Times bestselling author of The Jefferson Key, The Emperor’s Tomb, The Paris Vendetta, The Charlemagne Pursuit, The Venetian Betrayal, The Alexandria Link, The Templar Legacy, The Third Secret, The Romanov Prophecy, and The Amber Room — as well as the e-book original short stories The Balkan Escape and The Devil’s Gold. He has 12,000,000 books in print worldwide, translated into 40 languages and sold in 51 countries. He lives in the historic city of St. Augustine, Florida. He and his wife, Elizabeth, have founded History Matters, a nonprofit organization dedicated to preserving our heritage. To learn more about Steve and the foundation, visit www.steveberry.org.