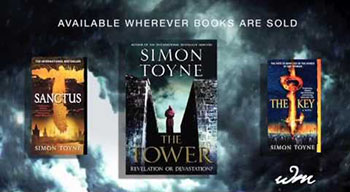 I was so anxious to dive into Simon Toyne’s latest offering The Tower, the third book in the Sanctus series; the first being Sanctus, the second being The Key. I anxiously awaited as each new book arrived, and have had a blast interviewing Simon. When The Tower arrived from Harper Collins I started looking for openings in my schedule. So as soon as I had a quiet moment I settled in, opened the book and fell into the final chapter of the Sanctus trilogy.

Knowing what I do about the political and religious climate of the day, it was interesting to see the viewpoint of an author across the Pond on what they see in America, told through the pages of a story. To be honest, how Toyne approached it actually withdrew me from the story slightly, because it seems to be all the literary rage to dissect Christianity. However, he is a brilliant wordsmith and storyteller, so not by much.

The Tower picks up right where The Key left off. The predicted plagues of the end of days are wreaking havoc with the world. Gabriel works his way back to The Citadel to hopefully contain the plague burning within him, and to die. Liz becomes this fuzzy otherworldly character that vaguely mirrors Mary, the mother of Jesus, as well as Eve, the mother of all living. And if The Sacrament, and I am still unclear as to what that actually is, is not returned to The Garden of Eden before a certain time it will bring about the end of the world. That gives us the overall arch of the story.

Enter fanatical Christians, who Toyne makes the bad guys, astronomers, NASA, a new FBI agent, correlations to the Tower of Babel, and some ancient religious organization called Mala. It’s a bit jumbled, but becomes clear in the book as we follow Gabriel, Liz and a new character, FBI Special Agent Jeff Shelpherd, who has an agenda of his own.

It sounds complicated, but it’s really not. I couldn’t put the book down. I’ve been working twenty hour days and any time I had ten minutes to spare I read The Tower. Toyne did a great job of pulling all the threads together, engaging us with the characters, and weaving religion throughout the story successfully.

All in all, Simon Toyne has proven he’s earned his place alongside James Rollins, Steve Berry and other top authors. Suspend disbelief and dive into his books, they are bold, there is no doubt of that. I give The Tower 4 out 5 stars.