Many social conservatives have come out opposed to the Boy Scouts even considering changing its long standing position on homosexuality.  One of the strongest opponents is the Family Research Council. Family Research Council (FRC) expressed deep disappointment at the Boy Scouts of America (BSA) for changing their long-standing position on membership regarding open homosexuality within the Scouts. 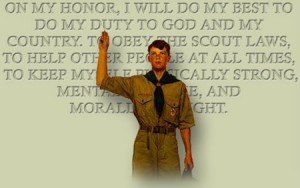 “Sadly, the Boy Scouts’ legacy of producing great leaders has become yet another casualty of moral compromise. Unfortunately, Boy Scout delegates capitulated to strong-arm tactics and abandoned the timeless values that have served the organization well for more than 100 years.

“The delegates succumbed to a concerted and manipulative effort by the national BSA leadership despite the BSA’s own survey showing 61 percent of its members in opposition to changing the policy.

“The Boy Scouts has for decades been a force for moral integrity and leadership in the United States. BSA councils, Scouting parents, and leaders of the faith-based organizations that charter over two-thirds of the packs and troops, must now decide how to respond to this moral compromise. Many will separate from the organization so that they can continue to foster character among boys and respect the right of parents to discuss issues of sexuality with their sons.

“It is clear that the current BSA leadership will bend with the winds of popular culture, and the whims of liberal special interest groups. There is little doubt that God will soon be ushered out of scouting. Now is the time for new leadership. In the meantime, we will stand with those BSA Councils who will now act to protect boys from a new policy that only creates moral confusion and disrespects the views of the vast majority of Scouting parents,” concluded Perkins.

On Friday at 5:05 PM ET, Texas Governor Rick Perry will appear on Washington Watch with Tony Perkins to offer his reaction to the outcome of the resolution. Listen online at www.tonyperkins.com.