By Amy Steele, Special for US Daily Review 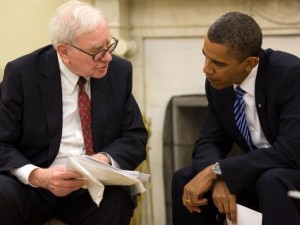 This week, OUR TIME – a national non-profit organization standing up for Americans under 30, polled its members on their support of President Obama’s proposed tax increases on wealthy Americans in a Facebook survey, resulting in overwhelming support. Over 80 percent of OUR TIME fans claim to support the “Buffett Rule” strongly, which, if passed, would let the Bush tax cuts for upper-income Americans expire and close corporate tax loopholes, raising an estimated $1.5 trillion in new tax revenue over the next decade.

The Facebook poll, open to over 5,000 OUR TIME “fans,” stated to potential respondents, “President Obama proposed a “Buffett Rule” yesterday which would raise taxes on the mega rich (those making over $1 million a year). Some reporters have called us and want to know what you think.”  The OUR TIME Facebook survey then asked respondents to choose one of the following five categories:

5.      Buffett’s worth is all in unrealized gain, so his averages are BS

OUR TIME’s survey shows that less than 9 percent of members oppose the proposed tax hikes, and just over 7 percent favor a strict 15 percent flat tax on all businesses and individuals, getting rid of any existing loopholes.

OUR TIME president and co-founder Matthew Segal believes that the only way this country can reconcile its debt is by fairly taxing those who can afford it.

“We have to put more into the system to minimize our deficit,” he says. “There are enormously wealthy people in this country who can afford a higher tax rate, and the feedback we received from our members certainly supports that. Our membership is a group of Americans who have grown up watching the expanding divide between the mega rich and those struggling to pay their bills.”

On the heels of a recent USA TODAY/Gallup Poll showing 66 percent of Americans support increasing income taxes for wealthy individuals, the OUR TIME survey is a clear indicator that millennials see the proposed “Buffett Rule” as a good idea.

In response to the survey, OUR TIME member Jessica Fahey wrote, “Our generation has to get ‘mad as hell’ about how our country is being run and realize that it is us who are going to need to do something about it.”

OUR TIME is a national organization founded and run by young Americans, leveraging pop culture, business partnerships, and online organizing to drive civic engagement through economic empowerment. To follow OUR TIME on Facebook go to: http://www.facebook.com/OurTimeOrg. Or to follow OurTime on Twitter, go to:  www.Twitter.com/OurTimeOrg.