What goes around, comes  around.

That’s the way Robert Long thinks about amphibious vehicles. A German Volkswagen factory produced around 15,000 of them in the early 1940s but these all-terrain, nautical autos are a rarity these  days. 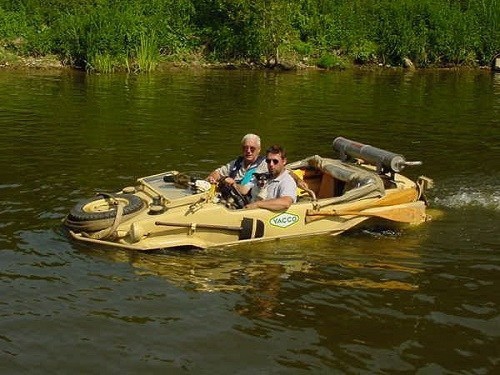 Long, an engineer from Kansas City, Mo., wants to change all that. He has modified the design of the original Schwimmwagen (swimming car) and come up with a concept for a modern  version.

“This is an amphibious vehicle that seats four and can get you anywhere you want to go outdoors,” he says. “It can cross rivers, lakes, muddy dirt roads, and sand dunes. The new Schwimmwagen replaces an ATV/UTV, boat, canoe, dune buggy and Jeep. It will enable you to push the limits of  nature.”

The modern Schwimmwagen will have rugged construction, all-terrain tires and a simple steering system that controls the craft in and out of the water. This is possible because the two front wheels are designed to serve as rudders when the vehicle is in the  water.

Powered by a 25 horsepower engine, it will be able to reach speeds of 50 mph on the road and 7 mph in the water. Two fuel tanks hold about 13 gallons of gasoline, enabling the Schwimmwagen to have a range of 325  miles.

The first step for Long is to find an original Schwimmwagen – there are still 160 working models around – and reconditioning it so it can be used as a demonstration model. This demo will be showcased at auto and engineering shows, with the goal of generating interest from investors and  manufacturers.

An original Schwimmwagen in running condition is very expensive and there are also significant costs involved with the trade show circuit. Long figures he’ll need about $200,000 to purchase a vintage vehicle and take it around the  country.

In order to raise this start-up capital, Long has launched an Indiegogo campaign at www.indiegogo.com/projects/schwimmwagen-ultimate-go-anywhere-vehicle. It includes color photos of the design and the dual-purpose vehicle in  action.

Donations of any amount are welcome. For a $250 donation, backers will receive a Schwimmwagen coffee mug. A $1,000 pledge gets you a Schwimmwagen T-shirt, and a 1/48 scale model of the  vehicle.

For $50,000 you can own a Schwimmwagen from the first production run. There will only be 10 vehicles manufactured on the initial  run.