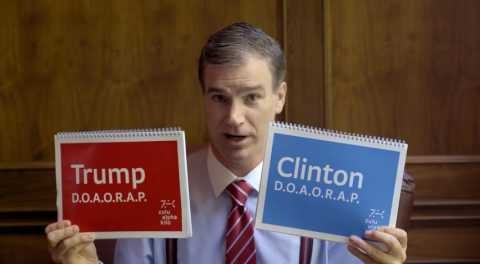 When advertising or marketing companies want to enter the U.S. market they usually set up an office in New York. Toronto-based creative agency Zulu Alpha Kilo has done something completely different. Hot on the heels of its 2016 Ad Age Small Agency of the Year win (http://adage.com/article/special-report-small-agency-conference-and-awards/a-2016-small-agency-year-zulu-alpha-kilo/305036/), the company has sent an unsolicited and hilarious video RFP (Request For Proposal) to the campaigns of both Hillary Clinton and Donald  Trump.

The video, (https://youtu.be/WEvx7_Lc7Lg) which also includes several spoof Clinton and Trump ads (http://zulualphakilo.com/trumpclintongallery), marks the second appearance of the company’s very unreal founder. He was first introduced for the agency’s own website – which pokes fun at the absurdities of all ad agency websites and even itself – earlier this year. The character is played by veteran commercial and film actor Doug Murray, who recently featured in Spotlight, 2015’s Oscar winner for Best  Picture.

Whether it’s saying no to spec (http://youtu.be/essNmNOrQto) or using its own website (http://www.zulualphakilo.com) to poke fun at the marketing industry, Zulu continues its unconventional spirit with this political  satire.

Zulu was named 2016 overall agency of the year Gold Medal winner in late July. The Ad Age Small Agency Awards go to independent agencies with up to 150 employees that have demonstrated smart strategies and innovative ideas for clients. Zulu’s win was the first time a non-US agency has ever been awarded the title, creating the inspiration for the spoof  video.

Zulu Alpha Kilo is based in Toronto, Ontario with a staff of 90 full-time “Zuligans.” The company enjoys a maverick position in the industry by daring to do things different. Most recently Zulu won Ad Age’s Small Agency of the Year top honors  globally.