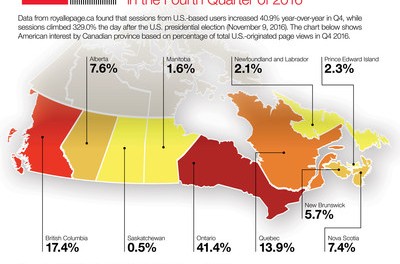 By Royal LePage, Special for  USDR

According to a new Canada-wide survey of 1,226 Royal LePage real estate advisors, U.S. interest in Canadian real property will continue to climb, with 39.5 per cent of respondents forecasting that American inquiries into Canadian real estate will rise under President Donald Trump. In the fourth quarter of 2016 – of which November and December are traditionally quieter times for North American real estate activity – 15.6 per cent of the advisors polled received inquiries from south of the  border.

“Always a desirable destination for migrants, Canada’s attractiveness as a country for international relocation has surged this decade,” said Phil Soper, president and chief executive officer, Royal LePage. “The United States was already a top source for immigration into Canada, and now in the period following the recent U.S. election, we are witnessing a material bump in American interest in Canadian real  estate.”

During the fourth quarter of 2016, American interest was primarily focused on Canada’s largest markets, with Ontario, British Columbiaand Quebec receiving 72.7 per cent of all U.S. regional pageviews generated on royallepage.ca. Those looking to purchase Canadian real property were largely interested in the country’s residential market, with three quarters (75.2 per cent) of all American inquiries pertaining to this market  segment.

“U.S. interest in Canadian real estate is not a new phenomenon –– we are next door neighbours,” said Soper. “From Whistler to Muskoka; to Tremblant and Nova Scotia’s south shore, Americans have traditionally been the largest foreign cohort of recreational property purchasers in Canada. With our country’s ever-growing global reputation as a financially sound, happy and culturally tolerant place to raise a family, it is not surprising that interest has moved from a place to play, to a potential place to live and  work.”

“Given America’s vast population, even a fractional increase in the number of households following through on this initial interest and successfully completing the demanding process of emigrating to Canada could drive a material increase in the number of home-buyers from south of the border,” concluded Soper. “Our federal government is seriously considering increasing the quota of new Canadians welcomed from abroad, and with the high value of the U.S. dollar increasing Americans’ purchasing power, we may be seeing more moving trucks with U.S. license plates in our  future.”

In last year’s inaugural “Best Countries” ranking published by US News in partnership with BAV and the Wharton School, Canada was ranked second worldwide in the comprehensive 75 element study, scoring very high on culture, sustainability, entrepreneurship and open-for-business categories. In the United Nations’ “Global Happiness Ranking,” Canadians scored sixth place. Additionally, the Economist’s widely followed “Most Liveable Cities” analysis, which ranks cities based on a balance of economic, safety and environmental factors, placed Vancouver, Toronto and Calgary in three of the top five spots worldwide, with no U.S. city ranked in the top  ten.

Ontario led the country as the top-researched destination by Americans on royallepage.ca in the fourth quarter of 2016, with 41.4 per cent of U.S. regional pageviews directed to the province. Over the same period, Ontario listings received a significant boost in U.S. pageviews, rising 54.5 per cent this year over last. According to the survey, 62.5 per cent of real estate advisors polled in Ontario cited the Greater Toronto Area (GTA) as the most desirable location for U.S. parties making inquiries into a home purchase since October 2016, while just over two-thirds (67.2 per cent) pointed to the GTA as the region in which Americans purchased the most property over the same period of time. Looking ahead, 38.4 per cent of survey respondents from Ontario expect U.S. inquiries into Canadian real estate to increase following Donald Trump’s assumption of  power.

In the fourth quarter of 2016, British Columbia accounted for 17.4 per cent of U.S. regional pageviews, while also showing a 62.9 per cent increase year-over-year. Interestingly, according to the survey, Victoria garnered the most attention among B.C. cities from prospective U.S. home-buyers, being cited as the preferred location by approximately one third (32.1 per cent) of respondents. In comparison, one quarter (25.0 per cent) of respondents cited Greater Vancouver as the top region of interest among American home-buyers considering a real estate purchase in B.C. Looking ahead to 2017, 43.6 per cent of B.C. respondents anticipate American inquiries into Canadian real estate will increase after Donald Trump takes  office.

U.S. traffic to Royal LePage’s Quebec listings accounted for 13.9 per cent of the total website sessions logged across provinces in the fourth quarter of 2016, and showed a 17.6 per cent increase in U.S. pageviews, year-over-year.  Meanwhile, the survey found that 40.0 per cent of Quebec respondents named the Greater Montreal Area as the main market in Quebec that Americans considered for a potential property purchase. In looking at property acquisitions by Americans since October 2016, of those polled in Quebec, over one half (53.3 per cent) of real estate advisors who sold a home to an American did so in the Greater Montreal Area, while 20.0 per cent sold a home in each of Quebec City and Mont-Tremblant. When Donald Trump takes office, 52.2 per cent of Quebec respondents believe the region will see an increase in U.S. inquiries in the period that  follows.

Despite accounting for a smaller percentage of U.S. website traffic provincially (7.4 per cent in Nova Scotia; 5.7 per cent in New Brunswick; 2.3 per cent in Prince Edward Island; and 2.1 per cent in Newfoundland and Labrador), according to real estate advisors surveyed, Atlantic Canada saw the highest percentage of sales inquiries from Americans since October 2016. In fact, during the fourth quarter, Royal LePage’s data showed a year-over-year increase in U.S. website sessions of 180.4 per cent, 125.5. per cent, 53.4 per cent and 41.7 per cent for New Brunswick, Nova Scotia, Prince Edward Island and Newfoundland and Labrador, respectively.  Over one quarter (27.9 per cent) of survey respondents indicated that Americans have expressed interest in a property in the Atlantic region since October 2016, with a large majority of inquiries (54.8 per cent) and purchases (54.2 per cent) taking place in Halifax. Furthermore, almost half (48.1 per cent) of those surveyed in the region expect inquiries to increase after Donald Trump assumes  power.

Provinces affected by recent economic downturns saw minimal interest from American buyers, with U.S website sessions for Albertaaccounting for only 7.6 per cent of the total. The survey showed that, of those interested in Alberta, Calgary (54.6 per cent) and Edmonton (27.3 per cent) were cited by respondents as receiving the most interest from potential U.S. buyers. Notably, all (100 per cent) survey respondents working in the region indicated that they have not sold a home to an American since October 2016 – the only region in the country to report zero U.S. real estate transactions for this period. Similarly, only 26.4 per cent of respondents believe the region will see an increase in real estate inquiries by Americans after Donald Trump takes  office.

The other provinces in the Prairies saw the least amount of interest by prospective American homeowners since October 2016, with only 1.6 per cent of U.S. website sessions being associated with Manitoba and 0.5 per cent with Saskatchewan. According to survey respondents, of the U.S. buyers interested in these provinces, Americans mostly inquired about property purchases in Winnipeg (50.0 per cent), Saskatoon (20.0 per cent) and rural Saskatchewan (15.0 per cent). Looking ahead, one third (33.3 per cent) of respondents expect to see an increase in American inquires after Trump assumes  power.

Royal LePage polled 1,226 real estate advisors across Canada between January 12-17, 2017.  Each respondent was asked to complete a survey composed of questions regarding their region of expertise and observations and beliefs pertaining to U.S. interest in Canadian real estate since the 2016 Presidential  Election.

Serving Canadians since 1913, Royal LePage is the country’s leading provider of services to real estate brokerages, with a network of over 17,000 real estate professionals in more than 600 locations nationwide. Royal LePage is the only Canadian real estate company to have its own charitable foundation, the Royal LePage Shelter Foundation, dedicated to supporting women’s and children’s shelters and educational programs aimed at ending domestic violence. Royal LePage is a Brookfield Real Estate Services Inc. company, a TSX-listed corporation trading under the symbol  TSX:BRE.