Three patients with amyotrophic lateral sclerosis will be permitted to receive a second dose of stem cells delivered directly to the spinal cord, in a clinical trial being led by the University of Michigan’s Eva Feldman, M.D.

The U.S. Food and Drug Administration (FDA) approved the second treatment after a review concluded that the patients showed no adverse effects from their first implantation surgeries. 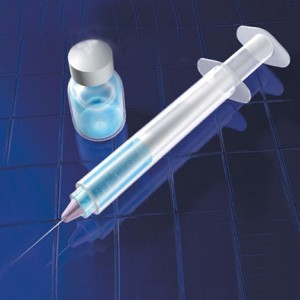 All have ALS, the inevitably fatal degenerative disease of the nervous system that many call Lou Gehrig’s disease. They received injections directly into the lumbar, or lower, area of the spinal cord.

None of the patients experienced any long-term complications related to either the surgical procedure or the implantation of stem cells, or showed signs of rejecting the cells. And in the months following the surgery to inject the cells, none showed evidence that their ALS progression was accelerating.

These patients will receive a second implantation to the cervical, or upper, region of the spine – where the nerves that control breathing reside.  Most ALS patients die of respiratory failure as these nerves die or are damaged by the disease.

“We believe that the cells and the route of administration are safe,” says Feldman, who is the principal investigator of the trial and the director of the U-M’s A. Alfred Taubman Medical Research Institute.  “The FDA go-ahead to bring these three patients back for re-dosing is a further validation of that.” The trial is funded by Neuralstem, to which Dr. Feldman is an unpaid consultant.

This Phase 1 safety trial, which is taking place at Emory University in Atlanta, began in January 2010. After reviewing safety data from the first 12 patients, the FDA granted approval for the trial to advance the cervical injections.  Three patients so far have received injections to that area. Those to be re-dosed will come from the first cohort of 12.

Results from that cohort recently were featured in the peer-reviewed journal Stem Cells in an article authored by Feldman and her colleagues at Emory, including neurologist Jonathan Glass, M.D. and neurosurgeon Nick Boulis, M.D., who performed the implantation surgeries. Boulis, an adjunct professor at U-M’s Medical School and a Taubman Scholar, also developed the device used to inject the stem cells into the spinal cord, which received a notice of patent allowance from U.S. Patent and Trademark Office in October.

“This important publication reinforces our belief that we have demonstrated a safe, reproducible and robust route of administration into the spine for these spinal cord neural stem cells,” says Feldman, who is U-M’s Russell N. DeJong Professor of neurology. “However, we must be cautious in interpreting this data, as this trial was neither designed nor statistically powered to study efficacy.”

For more information on the recent paper in Stem Cells, visit http://www.uofmhealth.org/news/stem-cell-als-0409 .

For more information on the trial, visit http://neurology.emory.edu/ALS/index.html