By Kevin Price, Publisher and Editor in Chief, US Daily Review.
One of the Major political stories of the weekend was the dog and pony show Romney had that included potential vice presidential candidates.  It has been reported that “More than a dozen Republican heavy-hitters… join(ed) the private retreat as special guests. According to a fundraiser who is attending, guests include(d) some GOP stars believed to be contenders to be Romney’s vice presidential running mate: Rep. Paul Ryan (Wis.), Louisiana Gov. Bobby Jindal and Sen. John Thune (S.D.)”… “Other guests… include former Secretar(y) of State Condoleezza Rice…, (and) former Florida governor Jeb Bush.” 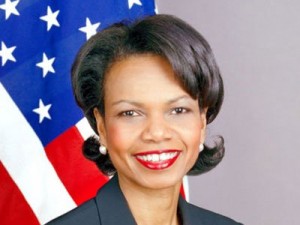 Throughout the day the talking heads on the Sunday news shows were projecting a possible best choice for Romney, with the conventional wisdom among the media being former governor of Minnesota Tim Pawlenty and freshman US Senator from Ohio, Bob Portman.  Others have had buzz for Jindal, while the flavor of the last several weeks was the freshman Senator  from Florida, Marco Rubio.  However, one candidate over the weekend is believed to have stolen the show, which is Condoleezza Rice. Rice, who was the foreign policy leader of the Bush Administration is known for her intelligence and eloquence. Furthermore, being a black woman could certainly help add energy to an otherwise flat and boring ticket.
According to Biography.com:

“Condoleezza Rice was made National Security Adviser by George W. Bush in 2001 and served as the 66th Secretary of State of the United States from 2005-2009” (Biography)

So what are the pros and cons for Rice?

The mainstream media continues to argue for a “safe choice” for Romney.  The man who looks like a cardboard cutout and has serious problems connecting with people needs to make a bold move to overcome his many negatives.  Unlike former Governor Sarah Palin, who had no idea what she was getting into on the national scene, Rice has “been there, done that” and provides a bold choice that is also intelligent.

Would Rice be my first choice for VP? Probably not, Marco Rubio still appears to be the man to beat. But Rice might now be the person to not only steal the weekend, but the VP spot.