Congressman Thad McCotter (R-MI) made nationally headlines, briefly, in 2011 when he announced he was running for president. His campaign was measured only in a few months as he never gathered traction. Maybe that campaign became a distraction in his efforts to run for reelection for his House seat or maybe he really no desire to be in Congress, which led him to not make the necessary steps to qualify, but McCotter resigned his seat today following several political disasters over the last few months. This is his statement today: 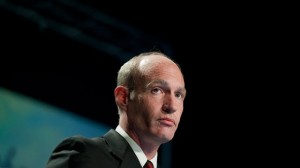 Today I have resigned from the office of United States Representative for Michigan’s 11th Congressional District.

After nearly 26 years in elected office, this past nightmarish month and a half have, for the first time, severed the necessary harmony between the needs of my constituency and of my family. As this harmony is required to serve, its absence requires I leave.

The recent event’s totality of calumnies, indignities and deceits have weighed most heavily upon my family. Thus, acutely aware one cannot rebuild their hearth of home amongst the ruins of their U.S. House office, for the sake of my loved ones I must “strike another match, go start anew” by embracing the promotion back from public servant to sovereign citizen.

I do not leave for an existing job and face diminishing prospects (and am both unwilling and ill-suited to lobby), my priorities are twofold: find gainful employment to help provide for my family; and continue to assist, in any way they see fit, the Michigan Attorney General’s earnest and thorough investigation, which I requested, into the 2012 petition filing.

While our family takes this step into the rest of our lives, we do so with the ultimate confidence in our country’s future. True, as at other times in the life of our nation, we live in an Age of Extremes that prizes intensity over sanity; rhetoric over reality; and destruction over creation. But this too shall pass, thanks to the infinite, inspired wisdom of the sovereign people who, with God’s continued blessings, will again affirm for the generations American Exceptionalism.

Truly, it is a challenging and fortunate time to live in our blessed sanctuary of liberty.

In closing, to The People of Michigan’s 11th Congressional District, I can but say this: Thank you for the privilege of having worked for you.