Joshua High School Valedictorian Remington Reimer, who is about to enter the U.S. Naval Academy later this month, retained Liberty Institute after school officials turned off his microphone during his speech at his high school graduation ceremony when he began talking about the Constitution, liberty and faith. Today, Liberty Institute sent an official notice letter, required under Texas law to give school officials 60 days to comply with state law to avoid legal consequences.  A copy of the letter may be found at http://www.libertyinstitute.org/document.doc?id=83

Texas state law, federal law, and Joshua ISD policy require the school to distance itself from the valedictorian’s speech, including not editing or drafting the speech, and printing a disclaimer in the graduation program that must read in part that “the content of each student speaker’s message is the private expression of the individual student and does not reflect the endorsement, sponsorship, position or expression of the District.”  Contrary to the law and its own policies, Joshua ISD school officials did in fact edit and attempt to control Mr. Reimer’s speech and failed to include the required disclaimer.

“These school officials broke the rules and violated state and federal law and their own board policy,” said Hiram Sasser, Liberty Institute Director of Litigation.  “They should be ashamed of themselves for violating school board policy and causing this needless embarrassment for Joshua ISD and the Joshua community.  Remington followed the rules, why can’t they?  We expect the good folks on the school board to take appropriate action to ensure their policies are followed next time.” 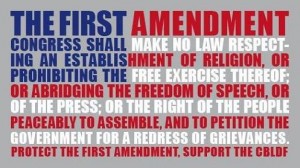 After graduation, the principal threatened to send a letter to the U.S. Naval Academy to ruin Mr. Reimer’s reputation in retaliation for delivering a speech of his own choosing, which included references to faith and liberty. School policy and state and federal law require the school to distance itself from censoring such topics.

“It was intimidating having my high school principal threaten my future because I wanted to stand up for the Constitution and acknowledge my faith and not simply read a government approved message,” said Mr. Reimer.

Liberty Institute is a nonprofit legal group dedicated to defending and restoring religious liberty across America — in our schools, for our churches and throughout the public arena. Liberty’s vision is to reestablish religious liberty in accordance with the principles of our Founding Fathers. For information, visit www.LibertyInstitute.org.